You are here: Home / Coronavirus / How industrial food makes us more vulnerable to COVID-19 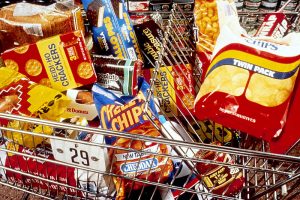 When I finished working on my book, “Formerly Known As Food: How the Industrial Food System is Changing Our Minds, Bodies, and Culture,” in 2018 — after 10 years of research and writing — I was certain of two things: First, our industrial food system is decimating our environment. Second, our nutrient-depleted, and chemically saturated processed food supply is changing our bodies from the inside out. It was also clear how these two issues are deeply linked: What we do to our environment, we do to ourselves.

What I didn’t know was that the COVID-19 pandemic was just around the corner and would bring global attention to the grave risks inherent in our industrial food system.

All over the world, industrial agriculture has pushed small-scale farmers deeper into forests where these types of pathogens exist. The decimation of forests has also sent those who bring wild animals into city markets deeper into remote forest areas, resulting in human exposure to novel pathogens.

On the consumer end of the food supply, our highly processed and nutrient-poor foods are causing unprecedented numbers of people to develop diet-related chronic diseases. Six in 10 adults have one chronic disease and four in 10 have two or more — overall, more than 40 percent of the entire U.S. population has a chronic disease, and many of those diseases are directly related to our food: diabetes, cardiovascular disease, stroke, kidney disease, and various cancers.

These underlying conditions correlate with increased morbidity and mortality for those who contract the virus. Preliminary findings show that metabolic dysfunction is causing devastating complications from COVID-19 and, shockingly, only 12 percent of the entire U.S. adult population is considered metabolically healthy. Metabolic dysfunction has one primary source: our highly processed, sugar-laden, nutrient-poor food supply.

This pandemic has the potential to illuminate the connections between the way we grow and produce our food, the environment, and our health. Both Big Ag and Big Food have worked hard to hide these connections from us, but now the truth is laid bare.

Back in January, before most of us would have predicted that this virus would cause a near-global shutdown, Chuck D, the founder of the seminal hip-hop group Public Enemy, contacted me to say he wanted to write a song inspired by my book, “Formerly Known As Food.”

Enemy Radio released the song April 1 called “Food As a Machine Gun (How Not to Die).” “We hoped to attack this with people having time and challenging themselves,” Chuck D told me. “But now everyone is facing the machine gun.”

Yet that gun isn’t pointed at everyone. “Food deserts and the corner stores/ Salty, salty, Where’s the reservoir?/Double the price if you black and poor,” raps MC Jahi, who along with DJ Lord, completes the Enemy Radio trio.

New data show that Black people are dying at higher rates from COVID-19 than other groups. Certainly lack of health care and poor quality of care shape outcomes, and it is well documented that poverty rates among people of color are significantly higher than in white populations. Perhaps less obvious is the influence of Big Food’s targeted advertising to people of color in neighborhoods with little access to fresh, whole foods. This means many people of color often rely on fast-food and cheap packaged foods for meals that provide more caloric bang for the buck. Nationwide, Black people have much higher rates of diet-related diseases — Black adults are 60 percent more likely to be diagnosed with diabetes than white adults.

“Sugar, sugar, you don’t love me,” Chuck D raps in the song. And yet our sugar-filled diets are only part of the problem. Our processed, packaged food supply lacks important nutritional components that help to protect our health and keep our immune systems functioning optimally. On top of that, these foods are contaminated with environmental chemicals — from additives to pesticides to food packaging. “Drugs in the food I love screwin’ up my physical/ I’ll never fall in love again./With this hate on my plate and/Food and Drug Administration/Is it my hallucination?” And in a later verse, “A new old kinda gangster get down/Pesticide chemical get around/Fast food industrial sit down/EPAs a gang throw it up now,” raps Chuck D.

There are about 9,000 chemicals used in and on our foods, and an estimated 1,000 have never been reviewed at all by the Food and Drug Administration. Meanwhile, those that have been tested are not tested adequately, according to researchers Tom Neltner and Maricel Maffini.

As I detail in my book, scientists and researchers have strong evidence linking environmental chemicals like BPA, phthalates, pesticides, and dioxins to diabetes, breast, ovarian, and prostate cancer, as well as impaired thyroid function and neurodevelopmental problems. There is also mounting evidence (see here, here, and here) that these chemical exposures are causing immune system disorders, resulting in an array of autoimmune conditions and leaving people more vulnerable to infectious diseases.

U.S. farmers use roughly 1 billion pounds of hundreds of different pesticides each year on conventionally grown crops, like corn, soy, wheat, oats, vegetable and seeds for oils, and sugar cane — in other words, the ingredients that make up the backbone of the industrial food supply. These same food products are then packaged in containers with thousands of potentially harmful substances.

Although regulatory agencies like the FDA and the Environmental Protection Agency report that consumers are only exposed to small amounts of these chemicals, there is little data to support that claim as most food is not monitored for environmental chemical residue.

In addition, there is an abundance of research showing that even low-dose exposure to a subset of these chemicals, known as endocrine disrupters, cause alarming health effects, from brain and developmental disorders to diabetes and cancers. It’s estimated that about 1,000 endocrine disruptors exist in our food supply and the environment.

“There is emerging evidence that even relatively low dose exposures to substances like endocrine-disrupting chemicals in foods can impair immune function,” said Andrea Gore, Professor and Vacek Chair of Pharmacology at The University of Texas at Austin. “They can affect the expression of genes in the brain that are involved in the brain’s immune and inflammatory responses.”

This pandemic is putting into focus exactly what has long been wrong in America: Big Ag and Big Food have been decimating our environment and our health for nearly a century, especially in communities of color. Now we are seeing the costs in real-time. “They’ve been feeding us toxic fuel and the virus is a match,” Chuck D told me.

Our current model for food production is no longer feasible if we wish to continue living on this planet. The food system is responsible for roughly one-third of all fossil fuel emissions. Large-scale mono-crop farms, concentrated animal feeding operations, fertilizers, pesticides, gas-powered machinery, storage facilities, manufacturing plants, and shipping methods are all dependent on and made possible by fossil fuels. Fuel combustion results in dangerous fine particulate matter, which kills 7 million people prematurely each year worldwide. And a new Harvard analysis shows that exposure to fine particulate matter correlates with COVID-19 deaths.

Industrial farming is also directly responsible for the destruction of rivers, streams, and fisheries; the oceanic dead zones and the dying of the Great Barrier Reef; the loss of native prairies and grasslands, essential for birds; and the near extinction of crucial pollinators, essential for food production.

Our fossil-fuel dependent model of farming has also depleted and decimated our soils due to improper land use and the application of pesticides, herbicides, fungicides, and antibiotics. Without healthy soil, there is no nutritious food. In the U.S., topsoil is eroding 10 times faster than it can be replaced.

People are quickly realizing how important local, small-scale farms and farmers are with some grocery store shelves looking sparse and farmworkers on large farms vulnerable to illness (they are also at greatest risk for complications due to pesticide exposure). Without healthy farmworkers, produce could be left to rot in fields. Supply chains are becoming stressed too as fewer trucks and planes are able to move produce and other goods.

A decentralized and regionally based food supply is far more stable than one that relies on transporting foods over great distances. We need to support the smaller-scale farmers who pay attention to soil health and the biodiversity necessary for healthy ecosystems — this is what will help prevent these kinds of pandemics in the future. We need more farms that respect the inherent balance in traditional farming methods: care of the soil and water, a balance that includes a mix of animals and crops, space for pollinators and other crucial wildlife to flourish, and natural and sustainable methods of pest control.

We’re going to have to get to the root of this problem, otherwise, crises like COVID-19 (or worse) will continue — and in case you haven’t noticed, no one is coming to our rescue. Handing the food supply over to Big Ag and Big Food has resulted in unprecedented destruction to our environment and our health. “Food has been the common denominator as the source of our crumbling surroundings,” Chuck D told me. “Stop the violence was the message we embraced 30 years ago, but food is the latest silent assassin disguised as big business.”

Lockdown in Ladakh
Making the Case for a Small Farm Future

Kristin Lawless is the author of “Formerly Known As Food: How the Industrial Food System Is Changing Our Minds, Bodies, and Culture,” which was the winner of the Green Prize for Sustainable Literature in 2019. Her writing has appeared in The New York Times, The Atlantic, Newsweek, and VICE, as well as in academic journals, such as The Black Scholar, Critical Quarterly, and The New Labor Forum.