You are here: Home / Technology / Help needed: 41 servants and counting 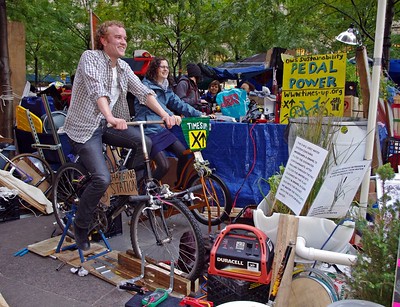 A few years ago, when I began questioning what it really takes to write and publish in our digital era, I wondered about electricity’s true costs. I learned that on average, in order to light, heat and cool our homes; to refrigerate and cook food; wash and dry laundry; keep hot water available; send emails, talk on phones, watch tv and videos, write on computers and publish and read posts online, US households use 1,000 kiloWatt hours (kWh) of energy per month.

How much is 1,000 kWh of power? The astrophysicist Adam Frank has explained that one able person can generate 24 kWh by pedaling a bike generator eight hours a day for 30 days. To generate 1,000 kWh, 41 people would need to pedal eight hours a day for a month. In other words, for the average U.S. household, having electricity 24/7 means having 41 servants who pedal for you without a day off.[1]

But those 1,000 kWh do not include the energy involved in manufacturing my appliances or electronics.

This matters – because 81% of the energy used by a laptop from its cradle to its grave is embodied: 81% of a laptop’s lifetime energy will be used before the end-user turns that laptop on for the first time.[2]

One smartphone has more than 1,000 embodied substances, including plenty of extracted  and smelted rare-earth metals, solvents and other chemicals, each with its own energy-intensive, greenhouse gas-emitting, toxic waste-emitting international supply chain.[3]

Those 1,000 kWh of electricity that average U.S. households use every month do not include the energy involved in maintaining the Internet’s infrastructure – the energy-guzzling, toxic waste emitting access networks (cables, satellites, routers, antennas, modems and battery backup systems) that let my computer transmit and receive data.

Those 1,000 kWh do not include the data centers (covered from floor-to-ceiling with servers and cooling systems) that store what I write. Data centers account for two percent of global greenhouse gas emissions.[4] The amount of energy consumed by data centers doubles every four years.[5]

Those 1,000 kWh do not include the energy used to discard or recycle my dysfunctional devices. At the end of their usable lives, electronics get shipped to dumpsites in Africa or Asia, where they may be burned to access copper, for example. Electronic waste impacts soil, water, air – and living creatures’ health. Electronics do not biodegrade. They are hazardous waste.

Pedaling for the Internet

How many servants does it take to run the Internet (and access this article)? The late corporate anthropologist Jane Anne Morris calculated that 4.8 billion people pedaling for six hours each day could generate enough power to operate the 2010 worldwide Internet.[6] (Pedalers can read online while they pedal.)

Since 2010, the number of Internet users has more than doubled to 4.66 billion.[7] Gosh. We don’t yet have nine billion pedalers available. To keep 2021’s World Wide Web going, we’ll need to increase the number of hours per bike-pedaling shift.

I should note that neither Frank nor Morris calculated the energy or extractions embodied in manufacturing or discarding billions of bicycle powered-generators and batteries.

I should also note that with billions of people focused on pedaling to keep lights and appliances running, we might drastically reduce our production and consumption of unnecessary manufactured goods.

I grew up with electricity and appliances. I’ve had a computer for 35 years, Internet access for more than two decades. I do not know how to survive without these things: I depend on unsustainable infrastructure and international supply chains.

If my state has an electric power outage for several weeks (like Texas had last February)[8] – if our thermostats, stoves, hot water heaters, refrigerators, washing machines, phones and computers stopped working – how would my neighbors and I survive? What tools would we use?

To prepare for power outages, should we take out our grandparents’ washboards, hacksaws and canning equipment? Should we build raised beds with insulating covers and dig root sellers? Should we each aim to reduce our consumption (watch your credit card and utility bills) by three percent per month? Or, should we all quit our jobs and start biking?

Postscript: After he read my piece about the number of servants we’d need to power our homes and the Internet via bike pedalers, industrial process designer Tom Troszak wrote me that the calculations I reported missed a few key items. If you link to the piece, you can read his postscript: www.OurWeb.tech/letter-24.

I also received an invitation from Environmental Health Trust to view Sue Williams’ documentary, “Death by Design.” The film reports on problems with the solvents used in manufacturing our computers. The film is fantastic. Of course, solvents are just one part of the Internet’s footprint. For information about the extractions, smelting, energy use, greenhouse gas emissions (and so much more) involved in manufacturing, operating and discarding computers, access networks and data centers, please read the letters by Katie Singer and Miguel Coma at www.OurWeb.tech/letters/.
I also recommend “Bright Green Lies,” Julia Barnes’ new documentary, and “Planet of the Humans,” Jeff Gibbs & Michael Moore’s 2019 documentary. Both films report on problems in manufacturing, operating and discarding renewables. The Internet shares many of these problems.
For suggestions on counterbalancing our tech use, check out www.OurWeb.tech/letter-15. Please also explore and share YOUR counterbalances! (Don’t we need all 7.6 billion of us doing this?)
— Katie Singer

This article was originally published by Wall Street International Magazine. All of Katie Singer’s and Miguel Coma’s articles about nature and technology are posted at www.OurWeb.tech/letters.

World Localization Day is back!
Bill Gates has radical plans to change our food. What’s on the menu?

Katie Singer writes about the energy use, water use, extractions, toxic waste and greenhouse gases involved in manufacturing, operating and discarding the Internet, solar PVs, industrial wind systems and e-vehicles. Her most recent book is An Electronic Silent Spring. Wall Street International Magazine publishes her reports about technology's impacts on nature. www.OurWeb.tech