You are here: Home / Consumerism / Groomed to Consume 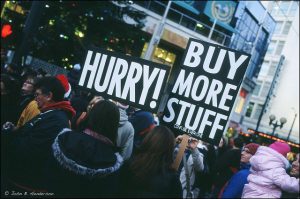 With Christmas coming up, household consumption will soon hit its yearly peak in many countries. Despite homely pictures of tranquility on mass-produced greeting cards, Christmas is more about frenzied shopping and overspending than peace on earth or quality time with family and friends. As with so much of our lives, the holidays have been hijacked by the idea that satisfaction, even happiness, is only one more purchase away.

Two generations ago, my Norwegian grandmother was overjoyed as a child when she received one modest gift and tasted an imported orange at Christmastime. In the modern era of long-distance trade and excess consumption, nobody gets even mildly excited by tasting a foreign fruit or receiving a small gift. Instead, adults dive into a cornucopia of global food (typically followed by a period of dieting) while children expect numerous expensive gifts – with designer clothes and electronic toys, games, and gadgets topping the list.

This comparison is not meant to romanticize the past or demean the present: it’s just a small example of how consumption has come to replace the things that give real meaning to our lives – like creating something with our own hands, or sharing and interacting with others. In the process, we have been robbed of the ability to take pleasure from small wonders.

Most of us are aware that excessive consumption is a prime feature of modern life, and that it is the cause of multiple social and environmental problems. We are living in a so-called “consumer culture” – a rather fancy title for something that has more in common with an abusive affliction, like bulimia or alcoholism, than it does with real living culture.

Rampant consumerism doesn’t happen by itself: it is encouraged by an economic system that requires perpetual economic growth. When national economies show signs of slowing down, citizens are invariably called upon to increase their consumption, which in a country like the US represents 70 percent of GDP. Curiously, when talk turns to the downside of consumerism – resource depletion, pollution, or shoppers trampled at Wal-Mart – it is the greed supposedly inherent in human nature that gets the blame. Rather than look at the role of corporate media, advertising, and other systemic causes of overconsumption, we are encouraged to keep shopping – but to do so “responsibly”, perhaps by engaging in “green consumerism”, a galling oxymoron.

I have no doubt that consumerism is linked with greed – greed for the latest model of computer, smartphone, clothes or car – but this has nothing to do with human nature. This sort of greed is an artificially induced condition. From early childhood our eyes, ears and minds have been flooded with images and messages that undermine our identity and self-esteem, create false needs, and teach us to seek satisfaction and approval through the consumer choices we make.

And the pressure to consume is rising, along with the amount of money spent on advertising. It is forecast that global advertising expenditure will hit $568 billion for 2018, a 7.4 percent increase over 2017.[1] According to UN figures, that amount of money would be sufficient to both eradicate extreme poverty and foot the bill for measures to mitigate the effects of climate change worldwide. [2]

Instead, we are “groomed to consume”. In the US, this means that the average young person is exposed to more than 3,000 ads per day on television, the internet, billboards and in magazines, according to the American Academy of Pediatrics.[3] While the figure may be lower in other countries, people everywhere are increasingly exposed to advertising – particularly through the internet, which now has over 4 billion users globally.[4] In fact, half of the global “consumer-class” can now be found in the developing world. Although per capita consumption in China and India remains substantially less than in Europe, those two countries now consume more in total than all of Western Europe.[5]

Marketing strategies – advertising, celebrity trend-setting, product placement in movies and TV shows, marketing tie-ins between media and fast food franchises, etc. – have evolved to target an ever younger audience, all the way down to the one-year old, according to sociologist Juliet Schor. In her book Born to Buy, she defines “age compression” as the marketing to children of products that were previously designed for adults.[6] Examples include makeup for young girls, violent toys for small boys, and designer clothes for the first grader. Schor’s research shows that the more children are exposed to media and advertising, the more consumerist they become; it also shows that they are more likely to become depressed, anxious and develop low self-esteem in the process.

However, children can become victims of the corporate-induced consumer culture even without direct exposure to advertising and media, as I learned during a year spent in my native Denmark, together with my then 12-year old son. Prior to our stay in Denmark, we lived in rural Mexico with limited exposure to TV, internet and advertising, and surrounded by children from homes with dirt floors, wearing hand-me-down clothes. The need for designer wear and electronic gadgets had therefore never entered my son’s mind.

However, after a few months of trying to fit in with Danish children, he became a victim of fashion, exchanging his usual trousers for the trend of the time – narrow sleek pants with diaper bottoms that impeded proper movement. Soon, style alone wasn’t enough: the right brand name of clothes was added to the list of things required for happiness. The same process was repeated in other parts of life: in Mexico, play would consist of an array of invented games, but a month in Denmark was sufficient for my son to feel too ashamed to invite anyone home because he didn’t own an Xbox. During that year, he cried bitter tears over the absence of things that he had never lacked before – video games, Samsung galaxies, iPads and notebooks.

Shifting away from a model based on ever increasing consumption is long overdue. On a personal level, we can take positive steps by disengaging from the consumer culture as much as possible, focusing instead on activities that bring true satisfaction – like face-to-face interaction, engaging in community and spending time in nature.

In our very small rural community in Mexico, we have tried to do just that in our daily lives. Christmas for us is a communal celebration running over several days, which includes lots of homegrown, cooked and baked foods, music, dancing and playing, both indoors and outdoors. A major part of the celebration is a gift exchange that celebrates our skills and creative powers. Rather than buying a multitude of gifts, we make one gift each to give to another person. Who we give to is decided in advance in a secret draw of names, not revealed until the exchange. For a month in advance, our community is buzzing with creative energy, as everybody – children and adults alike – is busy planning and making amazing gifts. Presenting our gift is the highlight of our celebration, even for the youngest. Thus the coin has been flipped from consumption to creation and from receiving to giving.

However, while personal changes like this matter, it is not enough to turn the tide: structural changes are also required.

Despite dwindling natural resources, increasing levels of pollution and CO2 emissions, and the many social costs of consumerism, no nation-state has yet been willing to renounce the economic growth model. This will not change until people pressure their governments to disengage from this economic model and to put the brakes on corporate control. This may sound undoable, but the current system is man-made and can be unmade. The trade treaties and agreements that favor corporations over nations, global over local, profit over people and planet, can be revoked and transformed. All it may take is an alliance of a few strategic countries willing to say “STOP”, to start a movement of nations willing to reclaim their economies.

When Jorge Mario Bergoglio was ordained Pope Francis, he came out with a public critique of the prevailing economic system that still rings true:

“Some people continue to defend trickle-down theories which assume that economic growth, encouraged by a free market, will inevitably succeed in bringing about greater justice and inclusiveness in the world… This opinion, which has never been confirmed by the facts, expresses a crude and naive trust in the goodness of those wielding economic power and in the sacralized workings of the prevailing economic system.”[7]

Yet, the blind belief in the economic growth model is waning, as ever more people realize that the present economic model is playing havoc with people and planet. Even the strongest proponents of the current system are finding it harder to repeat the “more economic growth is the solution” mantra.

So let’s downscale consumption this Christmas and celebrate creativity, community and our shared home – planet earth. Rather than commit to dieting in the new year, let’s commit to joining the call for systemic change – away from a destructive global casino economy that concentrates power and wealth, towards place-based economies operating under democratic control and within ecological limits, with global wellbeing in mind.

[2] “State of Food Insecurity in the World 2015”, UN Food & Agriculture Organization. http://www.fao.org/3/a-i4646e.pdf; Ritchie, Hannah, “How much will it cost to mitigate climate change?”, Our World in Data, May 27, 2017. https://ourworldindata.org/how-much-will-it-cost-to-mitigate-climate-change

[5] “The State of Consumption Today”, from State of the World 2004, Worldwatch Institute.