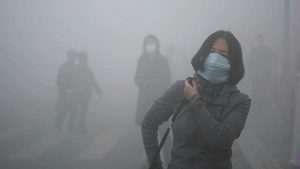 That pollution is bad for our health will come as a surprise to no one. That pollution kills at least 9 million people every year might. This is 16 percent of all deaths worldwide – 3 times more than AIDS, tuberculosis and malaria combined, and 15 times more than all wars and other forms of violence. Air pollution alone is responsible for 6.5 million of these 9 million deaths. Nearly 92 percent of pollution-related deaths occur in low- and middle-income countries. All this is according to the Lancet Commission on Pollution and Health, a recent report by dozens of public health and medical experts from around the world. This important report is sounding the alarm about a too-often neglected and ignored ‘silent emergency’ – or as author Rob Nixon calls it, ‘slow violence.’

In one media article about the report, the Lancet’s editor-in-chief and executive editor points to the structural economic forces of “industrialisation, urbanisation, and globalisation” as “drivers of pollution.”  Unfortunately, however, the report itself doesn’t elaborate upon this crucial observation about root causes – in fact, when it moves from documentation of the pollution-health crisis to social-economic analysis, some of the report’s conclusions go seriously awry, espousing debunked ‘ecological modernization theory’ and reinforcing a tired Eurocentric framing that paints the industrialized West in familiar ‘enlightened’ colors, while the ‘developing’ countries are portrayed as ‘backward’.

For example, one of the Commission’s co-chairs and lead authors Dr. Philip Landrigan (for whom I have the greatest respect for his pioneering work in environmental health), points out that since the US Clean Air Act was introduced in 1970, levels of six major pollutants in the US have fallen by 70 percent even as GDP has risen by 250 percent. According to fellow author Richard Fuller, this sort of trend proves that countries can have “consistent economic growth with low pollution”.

Coupled with the fact that about 92 percent of pollution-related deaths occur in low- and middle-income countries, this would indeed appear to validate one of the core doctrines of ecological modernization theory –– ‘decoupling’ –– which posits that while pollution necessarily increases during the early ‘stages’ of economic development, it ultimately plateaus once a certain level of wealth is achieved, whereupon it falls even as growth continues ever upward.

It is understandable why the Commission might want to package its message in this way: it makes an ‘economic’ case for addressing pollution that is palatable to policymakers increasingly ensconced within an economistic worldview, one that is increasingly blind to non-economic values (including, apparently, the value of life itself – one would have hoped that 9 million deaths would be reason enough to take action against pollution). The economic costs of pollution, along with the apparent happy coexistence of economic growth and pollution reduction, are marshaled to challenge “the argument that pollution control kills jobs and stifles the economy.” This favorite bugbear of industry and big business is certainly spurious – forget about pollution control ‘killing jobs’; the absence of such control is killing millions of people every year!

But, as I showed in my previous blog post (Globalization’s Blowback), much of the rich countries’ pollution has been outsourced and offshored during the corporate globalization era. It is disingenuous at best to cite instances of local pollution reduction alongside increased economic growth in the rich world as evidence of decoupling, when those reductions were made possible only because of much larger pollution increases elsewhere. A global perspective – where true costs cannot be fobbed off on the poor and colonized – is necessary for gaining a meaningful and accurate picture of the relationship between wealth, growth, development and environmental integrity and sustainability. Panning out to this broader global perspective shows that, in fact, GDP growth and pollution continue to be closely coupled. And because a large percentage of the pollution in poorer countries is a consequence of corporate globalization, so is a large percentage of pollution-caused deaths.

Choking – and dying – on globalization

China’s export-oriented industrial spasm, powered largely by burning coal, has bequeathed it notoriously lethal air pollution, so much so that, according to one study, it contributes to the deaths of 1.6 million people per year (4,400 per day), or 17% of all deaths in the country. Another study puts the total at two-thirds of all deaths, and concluded that the severe air pollution has shortened life expectancy in China by more than 2 years on average, and by as much as 5.5 years in the north of the country.

Interestingly, some studies have actually calculated the number of globally dispersed premature deaths from transported air pollution and international trade. One such study found that deadly PM2.5 pollution (particulate matter of 2.5 micrometers or smaller) produced in China in 2007 was linked to more than 64,800 premature deaths in regions other than China, including more than 3,100 premature deaths in western Europe and the USA. At the same time – despite manufacturing- and pollution-offshoring – about 19,000 premature deaths occur in the US from domestically emitted pollution for the production of exports – 3,000 of which are linked to items exported to China.

But this is far less than what the Chinese are suffering because of consumption in the West. According to the study, “consumption in western Europe and the USA is linked to more than 108,600 premature deaths in China”. (Worldwide, pollution emitted for the production of goods and services consumed in the US alone caused 102,000 premature deaths; European consumption caused even more: 173,000 premature deaths). Note that the above fails to take into account the costs of various other air pollution-related chronic illnesses. And of course, air pollution isn’t the only harmful human cost of China’s coal-driven industrial growth and export-orientation. According to Chinese government statistics, some 6,027 Chinese coal miners died in the course of work in 2004, though analysts point out that official estimates are usually highly conservative, and “the real number is probably higher”. Since 2004, coal extraction has grown significantly in China.

What about the transport of incomprehensible quantities of materials back and forth across the planet? Coal to China, commodities from China, waste back to China (the undisputed locus of global waste trade) – nearly all of it is done via oceanic shipping, which carries heavy ecological costs. The statistics on the scale and impact of the global shipping industry are arresting: a 2014 study found that ship traffic on the world’s oceans has increased 300 percent over the past 20 years, with most of this increase occurring in the last 10 years. According to one analysis, emissions from international shipping for 2012 were estimated to be 796 million tons of CO2 per year (or 90,868 tons per hour), more than the yearly emissions of the UK, Canada or Brazil. (An earlier study put the amount of annual emissions from the world’s merchant fleet at 1.12 billion tons of CO2.) Whatever the actual figure, shipping accounts for at least 3 to nearly 4.5 percent of global CO2 emissions.

Much worse, shipping contributes 18-30 percent of the world’s total NOx and 9 percent of its sulphur oxide (SOx) pollution. A single giant container ship can emit the same amount as 50 million cars: “just 15 of the world’s biggest ships may now emit as much pollution as all the world’s 760m cars”. By 2015, greenhouse gas emissions from shipping were 70 percent higher than in 1990, and, left unchecked, were projected to grow by up to 250 percent by 2050; this would make shipping responsible for 17 percent of global emissions. According to the University College London’s Energy Institute – whose astonishing ShipMap may be one of the best visualizations of globalization available – “China is the center of the shipping world; Shanghai alone moved 33 million units in 2012”.

And this is only maritime shipping. Air freight is even more pollution-intensive: though much less merchandise and material is moved by air, some estimates are that the relatively minor 1% of the world’s food traded by air may contribute upwards of 11 percent of CO2 emissions.

In sum, the toll of the global shipping industry makes the ‘death footprint’ of globalization’s air pollution even larger. A 2007 study conservatively estimated that just the PM (particulate matter) emissions of global shipping – estimated at 1.6 million metric tons – kill 60,000 people per year, which the authors expected to increase 40 percent by 2012.

To point out the harms of global pollution outsourcing is emphatically not to argue that US corporations, for example, should simply return their outsourced production and pollution to the territorial US. This was the erstwhile ‘Trumpian’ right-populist recipe. Under this ideology, the way to facilitate ‘insourcing’ is not to insist on higher labor and environmental standards abroad, but to systematically dismantle the framework of laws in the US (however weak many of them already are thanks to corporate-captured government agencies) – that is, to bring the race to the bottom home. Whether generous tax cuts and other hand-outs will entice the outsourcers back remains to be seen: it’s becoming evident that the Trump/Koch brothers enterprise is about both eviscerating domestic environmental and labor laws, and accelerating global transnational corporate pillage – the worst of all worlds.

An anti-corporate, degrowth, eco-localization stance is the unequivocal opposite. Firstly, it rejects the broader ends and means of the entire consumerist, throw-away project. Rather than merely bringing the disposable extractive economy back home, localization is about reconnecting cause and effect and overthrowing irresponsible and unethical environmental load displacement on the global poor. Localization is about re-orienting the entire economy towards sufficiency and simplicity of consumption, towards needs-based, ecologically-sustainable and regenerative production, and towards fair, dignified and democratic work and production. By definition, localization connotes less dependence on external resources and globalized production chains that are controlled by global corporations and are congenitally undemocratic. Putting power into workers’ hands is to not have globally–outsourcing, hierarchically–owned and managed corporations, tout court.

Of course Dr. Landrigan is right that reducing pollution doesn’t ‘stifle the economy’ – quite the contrary, if ‘the economy’ is understood in a much more holistic sense than mere GDP. But, as has been pointed out previously on this blog (here and here), we also shouldn’t equate a healthy economy with a growing economy. The converse is more often the case. To reduce global pollution deaths, we not only need robust pollution control regulations, we must reduce corporate power, globalization, and the scale of the economy as well.

Livin’ the Screen Life: #productsmakemehappy
Farewell to Development: An interview with Arturo Escobar