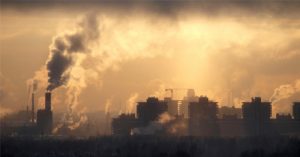 A recent study of air pollution in the western United States made a startling finding: despite a 50 percent drop over the past 25 years in US emissions of smog-producing chemicals like nitrogen oxides (NOx), smog actually increased during that period in the rural US West – even in such ‘pristine’ environments as Yellowstone National Park. Most of this increase was traced to “the influx of pollution from Asian countries, including China, North and South Korea, Japan, India, and other South Asian countries.”[1] That’s because over the same period that NOx emissions declined in the US, they tripled in Asia as a whole.[2] In media reports of the study, China and India are described as the “worst offenders” of this fugitive “Asian pollution”.[3]

Left only with these findings, a reasonable conclusion would be that the US has become more environmentally enlightened in recent decades, while Asia – particularly ‘developing’ Asia – is a veritable eco-reprobate, sacrificing not only its own but global airsheds to choking pollution. The new, anti-environmental EPA director, Scott Pruitt, recently expressed this view in explaining why the US should exit the Paris Climate Accord: “[China and India] are polluting far more than we are.”[4]

A similar study of global air pollution drift in 2014, focusing on China and the US, made comparable findings, but included an important factor missing from the more recent study: production for export. Among other things, the scholars of the older study asked how much of the Chinese air pollution drifting to the Western US was occasioned specifically in the production of exports for world markets (including the top destination for Chinese manufactures, the US.)

The answer? In 2006, up to 24% of sulfate concentrations over the western United States were generated in the Chinese production of goods for export to the US.[5] Applying these findings to the more recent study, it’s likely that a significant percentage of the Asian nitrogen oxides now choking the US West were also emitted in the production of goods destined for the US.

In other words, it’s meaningless to speak of “Asian pollution” in this context. Though the pollution was emitted in Asia, it properly belongs to the country/ies on whose behalf and at whose behest it was produced. Even more accurately, the pollution finally belongs to the transnational corporations (TNCs) who are the real drivers and beneficiaries not only of offshoring, but also of insatiable consumerism through marketing and obsolescence.

Economic globalization has enabled the manic scouring of the world by TNCs for the most ‘liberal’ (read: unregulated) environments in which to locate production facilities – the places where expenses can be minimized and profits maximized. Since the biggest drags on corporate profiteering come from taxes, environmental regulations, and decent labor protections and wages, the global relocations of TNCs have largely been towards countries where those costs are lowest, or absent altogether.

By increasing their economic power, globalization has also given TNCs the ability to capture governments, which then collude in further reshaping of the world through ‘free’ trade treaties, supra-national institutions like the IMF, WTO and World Bank, and subsidies and hand-outs to attract and retain big businesses.

This entire system of globalization, production and pollution off-shoring is driven by the profit-maximization logic governing transnational corporations, greased along by an ever-growing number of bilateral and global free trade treaties. As economist Martin Hart-Landsberg writes:

“Beginning in the late 1980s large multinational corporations, including those headquartered in the US, began a concerted effort to reverse declining profits by establishing cross border production networks (or global value chains). This process knitted together highly segmented economic processes across national borders in ways that allowed these corporations to lower their labor costs as well as reduce their tax and regulatory obligations. Their globalization strategy succeeded; corporate profits soared. It is also no longer helpful to think about international trade in simple nation-state terms.”[6]

China – having colluded with global capital in turning itself into the ‘factory of the world’[7] – is bearing the lion’s share of globalization’s brunt. But at least China is getting rich as a result, right? Certainly there is an emerging wealthy (and superwealthy) class within China that is profiting from globalization, but it represents a minuscule fraction of the overall population.[8] The mass of the workers who make up China’s labor and ‘bad-labor’[9] workforce are not benefiting from the country’s conversion into a TNC workshop: labor’s share of China’s GDP has been steadily falling since the late 1990s.[10] For a high-end electronic product like the iPhone, less than 2% (about US$10) of the sales price goes to Chinese workers involved in its production.[11]

So who is driving China’s export-oriented boom? Quoting Hart-Landsberg again, “it is not Chinese state enterprises, or even Chinese private enterprises, that are driving China’s exports to the US. Rather it is foreign multinationals, many of which are headquartered in the US, including Apple, Dell, and Walmart”.[12] By 2013, foreign-owned TNCs were responsible for 47% of all Chinese exports (and over 80% of high-tech exports) compared to a mere 11% by Chinese state-owned enterprises.[13] US-based TNCs dominate this control and ownership of exports made in China.

The division of profits from Chinese manufactures is also heavily skewed in favor of foreign corporations. For telecommunications equipment, China produced 38% of world exports in 2013, but their share of the profits generated by the sale of those products was just 6%, while US firms captured 59%. Similar imbalances obtain in the case of textiles, where US firms commandeered 46% of the profit share.[14]

From the production, sale and transport of globally-traded commodities, to the shipping of the resulting waste back to China,[15] and now to the profitable ‘adaptation’ to the ghastly air pollution,[16] TNCs are the main drivers and beneficiaries of this system. In other words, Chinese production and exports are dominated by US and other foreign corporations, and – like the pollution drifting across the globe – are not really ‘Chinese’ at all.[17]

This ‘Asian pollution’ may have an even deeper connection to the American west over which it is now drifting. The world’s largest surface mines are the Black Thunder mines, in the Powder River Basin straddling the Wyoming/Montana border. The mine’s owner and operator, Arch Coal, exports sizable amounts of this government-owned coal to places like China, where it is burned to power the factories that produce American consumer goods.[18]

It has been widely noted that American consumers have the largest ecological footprint in the world. While not completely absolving individuals – especially those on the upper rungs of the socio-economic ladder – for perpetuating this wasteful system, it can be argued that those large ecological footprints are not entirely their own. The combined effects of aggressive marketing, advertising, and planned product obsolescence[19] mean that the American consumer’s oversized footprint is largely a consequence and reflection of the global power of TNCs. In that sense, it is perhaps more accurate to speak of corporate ecological footprints rather than the footprints of nations or individuals.

Globalization has meant the distancing of cause and effect, source and sink, so that the pollution and human exploitation caused in the production and transport of goods has remained invisible and opaque to consumers. As Wendell Berry says, “The global economy institutionalizes a global ignorance, in which producers and consumers cannot know or care about one another, and in which the histories of all products will be lost.”[20]

Until now, it seems, corporations’ pollution offshoring was easy enough for Northern policymakers to comfortably ignore – it was offshored, after all. Of course, global warming already showed that simply exporting polluting production to the global South was meaningless as far as the Earth’s atmosphere and climate were concerned. But local air quality was seen as something distinct, so that the smoggy horrors of industrializing China or India were, for places like North America, still at a ‘safe’ distance. No more. Now, in addition to the products that magically appear on Western store shelves absolutely shorn of history and provenance, much of the hitherto distant pollution emitted in their production has also arrived. It has come home to roost. Globalization’s blowback.

[4] Kessler 2017 ‘EPA Administrator Scott Pruitt’s claim that China and India have ‘no obligations’ until 2030 under the Paris Accord’, The Washington Post, 14 April. https://www.washingtonpost.com/news/fact-checker/wp/2017/04/14/epa-administrator-scott-pruitts-claim-that-china-and-india-have-no-obligations-until-2030-under-the-paris-accord/.

[6] Hart-Landsberg, M. (2017a) ‘Trump’s Economic Policies Are No Answer To Our Problems’, Reports from the Economic Front, 13 February. https://economicfront.wordpress.com/2017/02/13/trumps-economic-policies-are-no-answer-to-our-problems/.

[7] David Harvey, among others, tells the complicated tale of how this transformation occurred: Harvey, D. (2005) A Brief History of Neoliberalism, Oxford and New York: Oxford University Press. ‘Neoliberalism ‘with Chinese Characteristics’’ (ch. 5).

[8] By 2015 China was expected to have the world’s fourth-largest concentration (4.4 million) of wealthy people (Atsmon, Y. and Dixit, V. (2009) ‘Understanding China’s wealthy’, McKinsey Quarterly. http://www.mckinsey.com/business-functions/marketing-and-sales/our-insights/understanding-chinas-wealthy), and where 80 of the 113 Asian billionaires (and over half the world’s total) reside (71% of Asia’s new billionaires in 2015, up from 35% in 2009) ( (Butt, R. (2016) ‘China gets a new billionaire every 5 days’, Business Insider, 13 October. http://www.businessinsider.com/the-number-of-billionaires-growing-fastest-in-china-asia-2016-10).

[9] ‘Bad labor’ refers to vulnerable, health-damaging, gender unequal, child and forced labor. Simas and colleagues have looked at the relationship between globalization of production chains and ‘bad labor footprints’, and estimate that more than half of such footprints behind “wealthy lifestyles of affluent regions” occur in the production of exported goods in un-affluent regions/countries, with the majority of these being in Asia. Up to 30% of bad labor conditions in poor countries are related to the production of exports (Simas et al. 2014 ‘The “Bad Labor” Footprint: Quantifying the Social Impacts of Globalization’, Sustainability 6.).

[14] Hart-Landsberg, M. (2017b) ‘US Corporations Continue Their Global Dominance’, Reports from the Economic Front, 21 April. https://economicfront.wordpress.com/2017/04/21/us-corporations-continue-their-global-dominance/.

[17] Hart-Landsberg, M. (2017b) ‘US Corporations Continue Their Global Dominance’, Reports from the Economic Front, 21 April. https://economicfront.wordpress.com/2017/04/21/us-corporations-continue-their-global-dominance/.

Our Obsolescent Economy
Book Review: From Global to Local – the Making of Things and the End of Globalization