You are here: Home / Development / From Global to Local in India 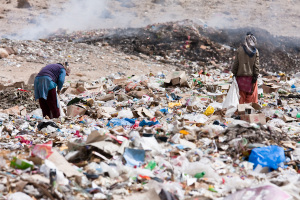 “The Future is Fast. We are Faster.” This ubiquitous billboard for a tech company neatly captures the zeitgeist in modern-day Bangalore, and rapidly-urbanizing India generally. Today, Bangalore’s erstwhile appellation as India‘s ‘garden city’ seems sadly anachronistic. To arrive at the Visthar Academy of Justice and Peace Studies on the outskirts of Bangalore – where we would be lodging for the next three days for the 3rd Economics of Happiness Conference – requires a painstakingly slow creep through bumper-to-bumper traffic, past glamorous shopping malls and an exploding, bewildering skein of real estate developments, garbage mountains, and slums. The air quality is truly mephitic from the collective emissions of millions of vehicles, factories, and garbage fires. Such are some of the characteristics of the modern Indian megacity, a rude foil to the Panglossian image of progress presented by the official boosters of globalization, urbanization and growth.

Conventional development – i.e. western-style industrialization, urbanization, and consumerism – is being foisted on India more intensively than ever by both Indian and foreign governments and corporations. The advertised purpose of this is to meet aggressive annual economic growth goals, dangling a shining GDP in front of foreign investors who will come and spur the process forward in a self-perpetuating cycle. Deeper still is the national political obsession with the elusive quest to reach the promised land of ‘developed.’

Development, as these forces implicitly conceive it, entails transforming India into a facsimile of modern America – the ecological, cultural, psychological and other shortcomings of that society notwithstanding. But, as author Aseem Shrivastava remarked during the Economics of Happiness Conference, “What is development really about? It is about the conversion of life into money.” The methods used to do so in India are commonly brutal, with various state governments using violent methods to wrest land from villagers in order to set up regulation-free corporate enclaves known as special economic zones.

As globalized development proceeds in India, giant corporations like Reliance Industries, Tata, and Bharti/Walmart are busy consolidating virtually every sector of the economy, with the helping hand of the central and state governments (see below). North American style supermarkets are spreading, and toxic plastics and used cell phones are being discarded into the environment as fast as the factories can pump them out. The impact on small farmers – many of whom have been swept into the dragnet of ‘contract farming’ – has been particularly deadly. Through deceitful advertising and the encouragement of development agencies, toxic chemicals and genetically manipulated seeds have invaded Indian agriculture, enabling companies like Monsanto-Mahyco to push thousands of farmers into debt and leading to an epidemic of farmer suicides. Responding to the common claim, “if corporate seeds and chemicals were so bad, why would farmers choose them?”, Kavitha Kuruganti of the ASHA (Alliance for Sustainable and Holistic Agriculture) Network told us in an interview at the conference how the agribusiness companies use dancing girls, Bollywood stars and many other highly manipulative techniques to push their products on farmers, while information on the hazards and risks is nowhere to be seen.

Far from representing the outcome of the mythically rational or natural workings of the market, this form of hyper corporate globalization – in India and everywhere else – is directly underwritten by subsidies, tax breaks, land-seizures and various other state giveaways and props, a.k.a. corporate welfare. Under chief minister Narendra Modi (and the new Prime Minister of India) the state of Gujarat has led the charge in aggressively dispersing this welfare to India’s richest one percent. As author Pankaj Mishra has written on the occasion of Modi’s recent electoral victory: “His record as chief minister is predominantly distinguished by the transfer – through privatization or outright gifts – of national resources to the country’s biggest corporations. His closest allies – India’s biggest businessmen – have accordingly enlisted their mainstream media outlets into the cult of Modi as decisive administrator; dissenting journalists have been removed or silenced.” [1].

Not to be outdone, the opposing Congress Party under the leadership of Manmohan Singh (the Harvard-educated economist who, as finance minister back in 1991 authored the liberalization policies that flung India open to the needs of global capital) has also been doing its utmost to increase the shareholder value of big corporations. To take one of many examples, this government has appointed the petroleum minister as environment minister (he holds both titles still, without any apparent sense of irony), who promised that “project-clearance files would leave his desk by 5 pm the very day they were presented to him; there was no promise of upholding environmental standards and safety.” As reported in a recent editorial, “This move indicates that the Manmohan Singh government is desperate to send out the “right” signals to the private sector and big capital.” [2] Among many other corporate-friendly priorities, this new environment minister began pushing immediately for allowing unrestricted GMO field trials and crop cultivation.

These sops to industry by the Indian state are in lockstep with the imperious lecturing of Western powers, in particular the U.S. government (and international institutions controlled by it like the World Bank and IMF), whose muscle is flexed in India on behalf of what it terms promoting a sound investment climate, euphemism for policy reforms needed to benefit conditions of profitability for American corporations (e.g., agrichemical corporations). The recently retired Ambassador Nancy Powell fulminated earlier this year, with characteristic American state hubris, “For India to return to faster growth, new policies and economic reforms need to be put in place by the government in areas such as opening multi-brand retail up to foreign direct investment.” What this amounts to is personal stumping for Wal-Mart by the highest representative of the U.S. government in India. U.S. officialdom in India issues variations of this royal decree ad nauseum. Even US President Barack Obama has taken up the cause of his country’s needy retail giant, complaining last July that “India has prohibited FDI in too many sectors such as retail” [3].

Meanwhile, the organs of the media and modern schooling continue their insidious assault on India’s diverse cultures, seducing and coercing ever more people away from their land-based traditions and local economies into the global consumer monoculture. A country with an ancient heritage of innumerable sustainable, zero-waste local economies is now increasingly awash in petrochemical pollution and gargantuan landfills, swelling megacities and glittering shopping malls for the super-affluent. Also on the rise are many of the less visible but equally devastating side effects of this kind of development: depression, diet-related diseases (e.g. obesity and diabetes), loss of languages, monoarchitecture (cement, rebar, and tin), monoclothing (mass-produced sweatshop synthetics), and worst, a deep internalization of notions of backwardness and a need to catch-up to or ‘develop’ like the United States and Europe. 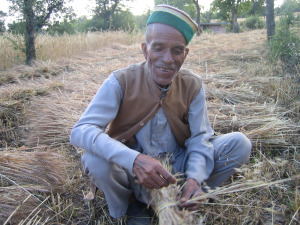 Despite the pace of ‘development’ in India, it is also true that much more of the vernacular, the traditional, and the independent hangs on here than in many countries. Even in the middle of major cities, large quantities of food and other daily needs are still supplied from tiny independent local shops or street vendors, and local craftsmen (weavers, potters, tinkers, tailors, etc.) ply their trades in the enormous ‘informal’ sector. Multinational chain restaurants like KFC and McDonald’s – while now ubiquitous in the affluent parts of cities – have not displaced stubbornly popular local eateries, and local alternatives to corporate junk food persist everywhere. And in spite of economic, trade and development policies that relentlessly conspire against them, small farmers still make up the majority of the population, and most of the food is still provided by them [4].

Because it still retains so much of the traditional and land-based, India is arguably better-positioned than the West to forge an alternative path to the future – one based on principles of economic localization. Despite the grievous losses to seed and food diversity occasioned by decades of imposition of industrial agriculture, an enormous amount remains intact, as illustrated at a recent seed festival and an amazing Adivasi (indigenous) food festival. There is a vibrant sustainable food and farming movement to protect and promote this diversity [see http://www.kisanswaraj.in/], and GMO trials can still be stopped here [see http://indiagminfo.org/] (Monsanto’s Bt cotton is the only commercially grown GMO, though the aforementioned petroleum/environment minister is working overtime to change that). Though the political establishment is dutifully working to roll out the red carpet for the big boxes, corporate retail has yet to fully penetrate, and faces formidable resistance from small shopkeepers [see http://indiafdiwatch.org/]. Farmers and tribal groups are courageously agitating against industrial land take-overs in dozens of states [5].

Most critically, countless groups and individuals are arising to confront the development monster – to actively challenge its assumptions and impositions, and to regenerate dying traditions and nontoxic local economies that rely on local resources. And there is vibrant resistance and renewal work happening all over the subcontinent that comprises, in essence, a massive localization movement.

The Economics of Happiness Conference provided a platform from which to launch an exciting new part of that movement, an India-wide initiative called Alternatives India (Vikalp Sangam in Hindi). The initiative asks this basic question: “As the world hurtles towards greater ecological devastation, inequalities, and social conflicts … are there alternative ways of meeting human needs and aspirations, without trashing the earth and without leaving half of humanity behind?” Their answer is a resounding yes, and they point to “a multitude of grassroots and policy initiatives: from meeting basic needs in ecologically sensitive ways to decentralized governance and producer-consumer movements, from rethinking urban and rural spaces towards sustainability to struggles for social and economic equity.” Alternatives India is a platform to highlight, connect, and thereby strengthen the country’s diverse profusion of local initiatives that are charting a saner course into the future for India. Perhaps the future of India is not fast and faster after all, but slow and local.

Davos: peeling back the veneer
Land Grabbing and the Threat to Local Land Rights