You are here: Home / Events Calendar / Report on the Economics of Happiness Conference in Florence

Our Project Coordinator Alex Jensen reflects on the 8th International Economics of Happiness Conference in Florence, Italy, which took place on October 2nd, 2016.

Florence, Italy, was an appropriate place to host the 8th International Economics of Happiness Conference. What better city than the ancient European center of international banking and trade in which to assemble Italy’s contemporary localization movement — today’s dissidents against that old system? Despite its long history in the development of the commercial economy that besets the whole world — and despite significant impacts to the country from corporate globalization — Italy retains much promise for a ‘re-renaissance’ of sorts, a society of local production and consumption rooted in principles of justice and ecological integrity. The vernacular architecture and settlements – many of them bequeathed by centuries-old merchant wealth — are well-situated for new localization initiatives. By their historic stature, they also stand as barriers to the rationalized infrastructural grids necessary to global investors and trade.

And what better day to hold this conference than Gandhi’s birthday, October 2nd, now also known as the ‘International Day of Non-Violence’? Gandhi saw and exposed the violence and structural irresponsibility inherent in economic expansionism/imperialism, and conversely recognized that a non-violent society required a place-based economics guided by an ethos of sufficiency. “When production and consumption both become localized,” he wrote, “the temptation to speed up production, indefinitely and at any price, disappears. All the endless difficulties and problems that our present day economic system presents, too, would then come to an end.” 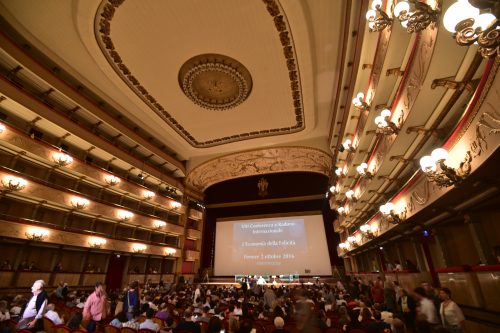 The conference was co-hosted by Local Futures and the Italian NGO Mani Tese, a global justice and anti-hunger organization, and counted dozens of other diverse organizations as sponsors, partners, media partners, and allies. These groups are working on a gamut of issues to do with resistance to the corporate economy, and (re)construction of alternatives oriented towards social and environmental justice and well-being.

Enthusiasm for exploring and debating the big-picture issues raised at Economics of Happiness conferences was evident not only from the impressive and extensive group of organizational supporters, but also in the 1,200-plus people who filled the elegant Teatro Verdi — most of whom stayed all day long, from 9am to 7pm, listening to lectures, forging new friendships, networking in the foyer, and sharing local, organic food. In addition to an opening keynote by Local Futures’ Helena Norberg-Hodge, they listened to translated lectures by notable international speakers including eco-feminist Vandana Shiva, Transition Town pioneer Rob Hopkins, local business advocate Michael Shuman, Indian environmentalist Ashish Kothari, and mainstream schooling critic Manish Jain.

The conference tapped into an emerging movement in Italy, visible in the wonderful ‘map of alternatives’ across the country being assembled by another conference partner, Italia Che Cambia (‘Italy That Changes’). The spirit of the day was captured by conference press officer Giorgia Vezzoli: “Lately conferences do not attract many people, but this was something incredible!”

One left the conference feeling a palpable sense of inspiration and encouragement, a hopeful vision of myriad converging currents of sanity and commitment to a better Italy, and by extension a better world.

Special thanks to Gloria Germani, the main organizer and instigator of the event, and to Lucy De Fazio and her team of volunteers for their tireless, selfless efforts towards making everything happen.

Return to the conference page