You are here: Home / Food and Farming / Eating Well is a Revolutionary Act 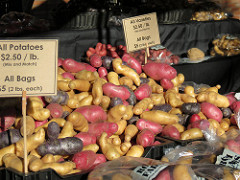 “We all need nourishment for our psyche. It is impossible to find such nourishment in urban tenements without a patch of green or a blossoming tree. We need a relationship with nature. I am just a culture-coolie myself, but I derive a great deal of pleasure from growing my own potatoes.”

If you don’t have a few fruit flies in your house, you may not be enjoying the harvest as much as you could. Life tries to abound around us as it has during all of human evolution. Only recently have humans been misled into trying to live in sterile environments.

I am lucky to live near the very fertile Skagit Valley in the Pacific Northwest so I have access to some of the finest food in the world. Many of the farmers around here grow organic foods, as do most of my neighbors. Our local Transition organization, Chuckanut Transition, has set up a neighborhood farmer’s market which, along with sales, includes food- and seed-swaps. There are two food co-ops relatively nearby where I can get any organic food I do not grow or cannot get from the local farmer’s market. I have a small orchard, and my dehydrator goes non-stop during September and October. The pleasures of harvesting, preparing and eating tasty, nutritious, healthy, nontoxic food are among life’s high points, and every day I thank my luck at being in this paradise.

Why Do We Need a Food Revolution?

During my 72 years, I have watched drastic changes as the quality of air and water have become iffy and food has gone from garden- or farmer-grown to highly processed Wonder Bread, to sterilized, genetically-altered, over-packaged, over-processed, toxic, industrial junk. Consequently, health in the USA is going into the dumpster. Obesity, cancer, diabetes, heart conditions, and high blood pressure are deadly impacts of the industrial food industry. 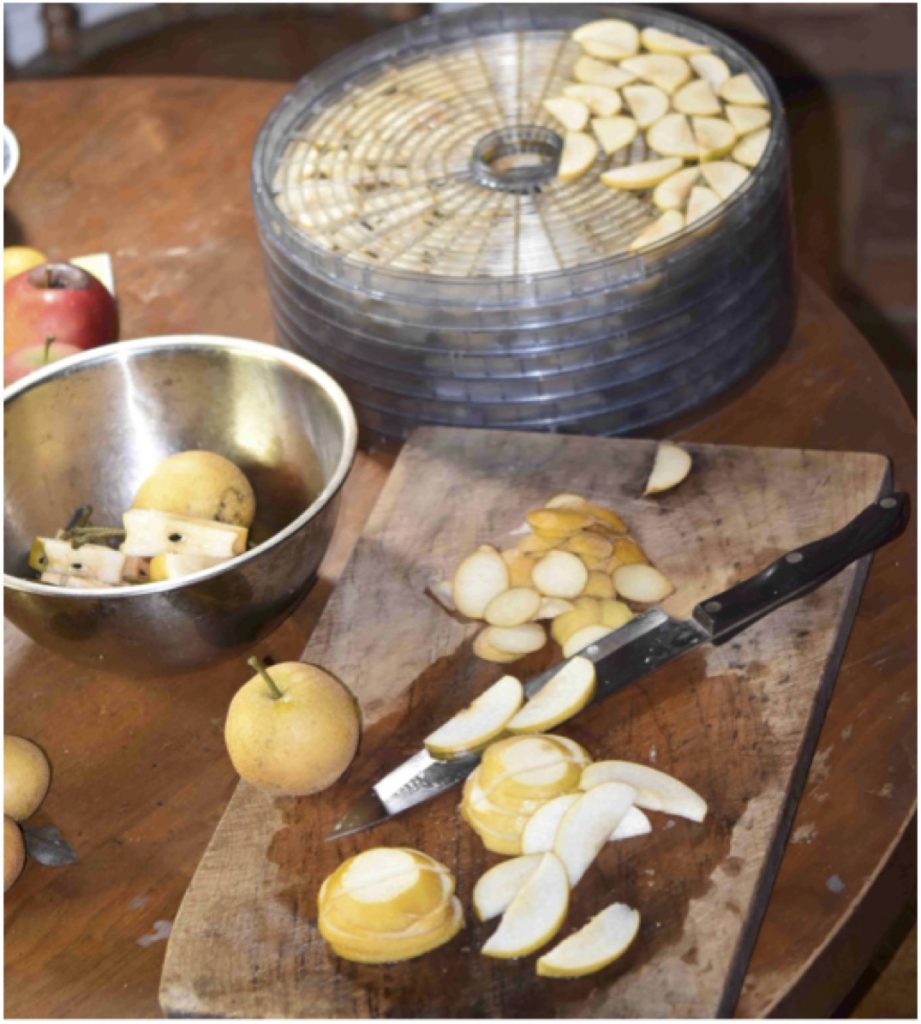 dia, the US ranks number 50 in longevity.  That figure is totally unacceptable for the country that spends the most on healthcare. Healthcare in this country is “for profit”, so illnesses are treated with expensive pharmaceuticals, but little or no effort goes into prevention or cure. Insurance companies base their rates on anticipated medical costs plus a percentage profit for them. As costs go up, they make more money, so they have no incentive to push for cheaper healthcare. Across the board – from industrial farming to the medical profession to the insurance industry to the pharmaceutical industry to the genetics and pesticides industry – maximizing profit endangers the health of US citizens.

Governments are supposed to protect their citizens, but in the US, government protection and regulation of these industries is currently a joke. The Food and Drug Administration (FDA) is in bed with Big Ag. Whether coming from the FDA or Congress, rules meant to regulate and ensure safety from industry are written by industry and rubber stamped by the “regulators.” Congress passes “farm bills” that subsidize the worst of the toxic food industry. If it were not for subsidies for growing corn, we would not have GMO corn and its associated pesticides destroying what were once fertile soils in the Midwest. We would not have high-fructose corn syrup and refined sugar in almost every packaged food. Our meat would not come from sick, grotesquely abused, antibiotic-soaked, corn-fed animals. The overuse of refined sugar in this country is addicting, maiming and killing people through obesity, heart disease, liver disease, diabetes and cancer.  Factory farming is killing us and the soil upon which we depend.

If we are to regain control of our food and our health, we have to resist Big Ag in every way we can. Our government and its “regulators” are raking in industry’s bribes so they will not make needed changes.

How Does This Revolution Work?

The first step in getting out of a hole is to quit digging. Read labels with eyes open: most nutritional claims are lies; words like “natural” have been redefined to include chemical toxins. Stop buying and eating processed and packaged food. Those foods are not cheaper. Any time saved will be small, and the ingredients will usually be unhealthy. Time and money “saved” are no match for the expensive healthcare costs of eating those toxic calories. Watch out especially for sugar, chemical flavors, colors and preservatives. Real food does not need this stuff to taste good.

Michael Pollan’s book In Defense of Food covers this topic well. If you need any convincing, do some people-watching in grocery stores. Go into a Safeway or other big box store and look at the customers. You need not be a doctor to see that most are overweight and unhealthy. Refine your observations and notice that the shoppers in the middle aisles – sometimes called the “morgue” in grocer’s parlance, i.e. the aisles that contain mostly sugar-packed garbage – are less healthy than those shopping in the side aisles where there are fewer packaged foods. Then go to a co-op where attempts are made to offer organic local food and you’ll see much healthier-looking people. The visual difference between the shoppers is startling if you care to look at it.

I need to reiterate my point about the propaganda used in selling bad food. Lies are seemingly OK to the FDA, and Big Ag is successful at bribing “nutritionists” to tout worthless, harmful calories as health food. It is worth mentioning that food in the “morgue” is ubiquitously marketed in the mainstream media. Try to keep children out of the “morgue” where they will see all the sweets and other garbage that remind them of the familiar tunes and pretty pictures they’ve seen on Saturday morning cartoon shows.

My point is that by eating good food, we not only become more healthy ourselves, but we also stop contributing to the corporations that are controlling and wrecking this country – that bribe our government to let them keep doing the nasty stuff they are doing. 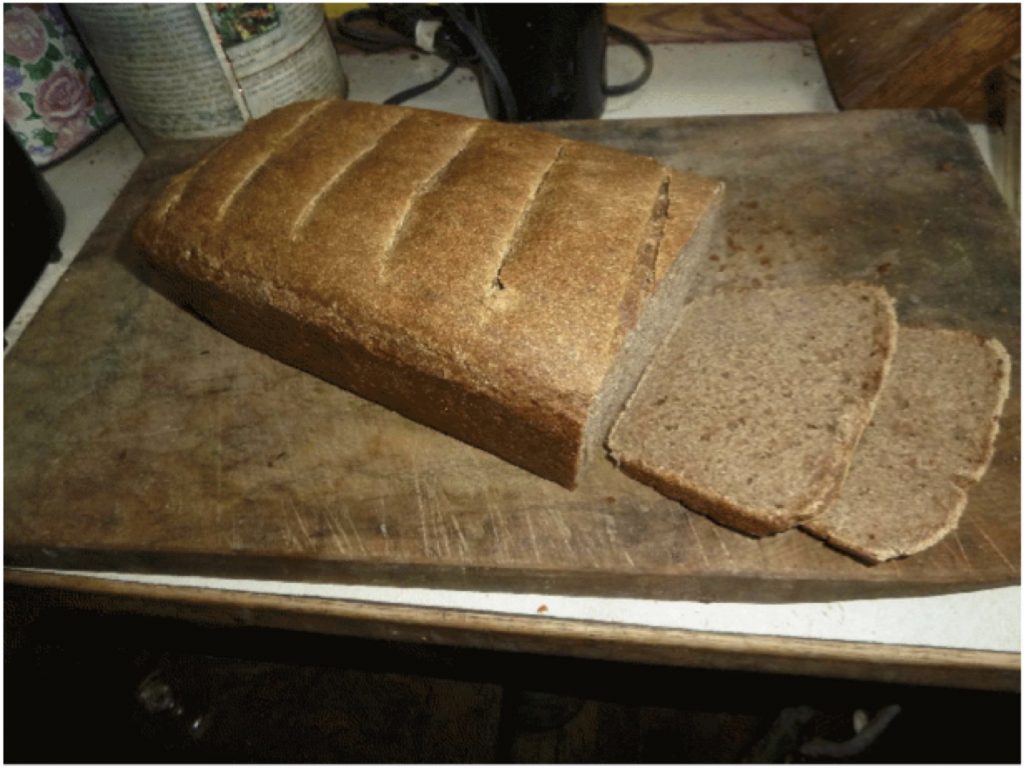 There is an increasing preference for organic food. If we had free markets and a representative government, this would already be making a big difference, but we don’t have free markets, and our government is run by and for corporations. The propaganda mill and government guidance are all on the side of poison industrial food.  We are bombarded with the lying hype that Monsanto is trying to “feed the world” and that “GMOs are not dangerous or unhealthy.” We are conditioned to buy the cheapest calories to fill our stomachs in a rushed world. The revolution will require a resurgence of common sense, and a sharp look at the damage to health and the environment compared to the empty promises and guarantees flooding us.  The fight to eat well is difficult, but there are steps we can take now:

So swat the fruit fly if you have to. Ignore it if you don’t. The fruit fly is a “taster” working for you, and if it does not die from poisoned food, maybe you won’t either. If we are unsuccessful with the revolution, fruit flies may become one of the safer parts of our protein intake.

Agrivillages: an interview with James Skinner
Regenerative Agriculture: our best shot at cooling the planet?

Chuck Nafziger deals with the contradiction of being a retired mechanical engineer and a Luddite at the same time. He lives in a rural area, which has brought him into closer contact with Nature, and where he has never felt more spirituality. As a result, he says, "the country and the world can continue on its path to hell, and I will still find peace."