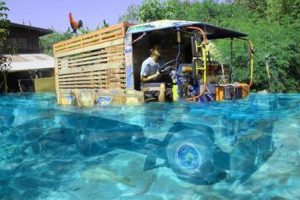 The moment I first learned about climate change will always stick in my mind. A seventh-grade ecology class led to a conversation between girls after school about what, back then, was being called “global warming”. Kicking at the snow while waiting for the bus in the depths of an upstate New York winter, it sounded like a good thing. Of course, we soon learned it wasn’t – and many of us became enthusiastic environmental activists, running school campaigns on decreasing electricity use, reducing car dependence and saving the Amazon (that big one that existed before the online retailer). It was the early 1990s and “mitigation” was the word. It looked like we still had time to halt climate change if we made the right policy and lifestyle choices.

When climate “adaptation” became prominent in conversations a few years later, it felt to me like a cop out. Like a justification for continuing to wantonly burn fossil fuels as long as we built better flood defenses and stockpiled enough food and water. Now, decades on, public discourse continues to swing back and forth on the emotive dichotomy of mitigation vs. adaptation. Mitigation has been getting more buzz recently, especially with the UN reiterating in March that little more than a decade remains before it will be impossible to prevent “irreversible” damage to the climate. Calls for concrete government action to reduce greenhouse gas emissions are being echoed around the world right now by Extinction Rebellion protests. But at this point, we really need both. And adaptation doesn’t have to mean more status quo corporate techno-fixes. It can be radical, creative, meaningful and place-based. How to go about achieving this is the overarching theme of Facing up to Climate Reality: Honesty, Disaster and Hope, a book which I had the pleasure of contributing to earlier this year.

A collaborative effort by activists, researchers, lecturers, and writers assembled by UK-based think tank Green House, the book takes an honest, critical and rebellious look at climate solutions and adaptations. In the Introduction, Green House members Brian Heatley, Rupert Read and John Foster explain that “there is a mismatch between the climate crisis and the political institutions and ideologies being looked to for solutions, especially under neoliberalism… Adaptation is transformative when it is premised not on preserving as much as possible of our present world – of uninterrupted human ‘progress’ and material prosperity – as is compatible with accommodating the climate and ecological damage which we have already done, but rather on responding to that damage through open-ended change in our institutions, practices and policies across the board.”

In our chapter, “Making the best of climate disasters: on the need for a localized and localizing response”, Rupert and I address the fact that climate change inevitably means disaster. Of many different kinds, from the hurricanes, floods, droughts, fires and record-breaking heatwaves we’re seeing already to disasters whose shape and size we can’t begin to imagine. We propose that, if we are prepared, we can harness the upheaval of such events to build strong, sustainable local economies in their wake. This would provide a much-needed counterpoint to the current globalized pattern whereby “ruthless elite/rich elements in society exploit disasters and reconstruct afterward in a way that leads to more privatization and control of the economy by large corporations.” Widely known as “disaster capitalism” – first described by Naomi Klein in The Shock Doctrine – examples include the period following Pinochet’s takeover in Chile and the aftermath of Hurricane Katrina in New Orleans, both of which involved large-scale privatization of public sectors, greater inequality and untold human suffering. These cases and many others demonstrate how private interests step in quickly to exploit the vulnerability and instability created by crisis, ultimately leading to more of the same.

In the localization movement we see that another way is possible: “one that builds on the extraordinary ordinary natural inclination for people to come together in solidarity and creativity after a disaster. This creates an opportunity to strengthen and rebuild local economies that put the well-being of people and of the planet at the centre: a sort of ‘disaster localization’, if you will.”

Disaster localization could help us avoid “each new disaster leading to a more entrenched global capitalist system, with its social impacts as well as its hefty contribution to increasing carbon emissions”. Rupert and I draw on inspiration from a variety of sources, especially Helena Norberg-Hodge’s vision of localization, Charles Fritz’s research on disasters and mental health, and Rebecca Solnit’s writings about post-traumatic growth in the aftermath of crises. Taken together, it’s clear that what we need is a good plan: “Just as disaster capitalism has succeeded thus far by having a neoliberal paradigm constructed and promoted ahead of the disaster, those of us working for more positive futures need to have a clear vision of what we are aiming for…one that is strategic, inclusive and looks far into the future. Otherwise, we are bound to lurch from one disaster to another with potentially cumulatively destructive outcomes. It is a new challenge…because the era of climate chaos promises a ratcheting up of connected, ramifying disasters.”

A localized response to this challenge involves the strengthening of community—the production of empathy in real circumstances of contact and of co-creation—so that we are focused most on creating a resilience of living beings in a network of cooperative interdependence, not just the resilience of material things to climatic events. This would be “transformational adaptation, bold enough to rise to the challenge of the coming climate disasters; one that is based solidly in understanding that what is needed above all when disaster strikes is solidarity; as well as one that calls upon government to assist in these great changes.”

One way or another, we will inevitably be forced to face up to climate disasters – as individuals, communities, nations and as a planet. We have the stark choice of either letting change come in a “difficult and uncomfortable way, if some variant of business-as-usual leads our civilization to collapse. Or, a more vital, sustainable and pleasant kind of localization can be created. This will be challenging to bring about in the face of massively powerful opposing political and economic forces and assumptions. But it is so preferable to the alternative that it is worth fighting for, and hard. The scale of the climate crisis calls for systemic change. The systemic change needs to involve a deliberate fostering of community and of low-impact living. This is exactly what the transformational program of localization offers.”

As regular readers of our blog know, Local Futures has created many resources to facilitate this transformation. We are pleased to have added to them by collaborating on this book, with its diversity of perspectives on facing our climate crises head on, constructively and creatively. As one reviewer put it: “From the ashes of the old hope, Facing Up to Climate Reality opens up space for a new and potentially more fruitful dialogue. Whilst the authors clearly recognize our profound crisis, they suggest that we may yet navigate our way through it, and in so doing could deliver improvements in some key aspects of our quality of life.”

The book is available in paperback and ebook formats from Green House think tank.

The Real Economy
Thinking Outside the Grid