You are here: Home / Free Trade and Globalization / Davos: peeling back the veneer 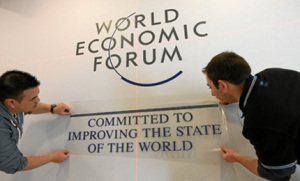 Scrolling through the website of the World Economic Forum – convening this week in Davos, Switzerland – one might confuse the premier platform for global capital with a savvy and hip think tank, or perhaps a philanthropic aid and development charity. The content is carefully curated to sedate and comfort. The right buzzwords are there: “impact investing”, “embracing democracy”, “our oceans”, and “sustainability.” In the Issues section, one finds Environmental Sustainability, Health for All, and Social Development. An article by Nobel laureate economist Joseph Stiglitz (a critic of globalization) is featured front and center, as if to proclaim, ‘challenging the stodgy status quo through edgy, unorthodox economic thinking – that’s what we do here.’

There’s nothing to indicate that this is, in fact, a platform for multinational corporations, among them human rights abusers, political racketeers, property thieves and international environmental criminals. But then, that wouldn’t exactly make for a very inviting homepage.

Here, for example, is the WEF mission statement:

The World Economic Forum encourages businesses, governments and civil society to commit together to improving the state of the world. Our Strategic and Industry Partners are instrumental in helping stakeholders meet key challenges such as building sustained economic growth, mitigating global risks, promoting health for all, improving social welfare and fostering environmental sustainability.

Rather than getting bogged down in a detailed evaluation of WEF’s high-minded claims and eco-populist rhetoric, it may be more efficient to consider the behavior of those corporations and banks that comprise the Forum’s list of Industry Partners – described as “select Member companies of the World Economic Forum that are actively involved in the Forum’s mission.”

Among them are Shell, Nike, Syngenta, Nestlé, and SNC Lavalin – companies you’ll also find on Global Exchange’s list of the Top 10 Corporate Criminals of 2013, based on offenses like unlivable working conditions, corporate seizures of indigenous lands, contaminating the environment, and similar transgressions. At least seven other companies “actively involved in the Forum’s mission” are recent alumni of the Corporate Criminal list.

Or consider Corporate Accountability International’s Corporate Hall of Shame, comprised of “corporations that corrupt the political process and abuse human rights, the environment and our public health.” Seven of the ten ­– Walmart, ExxonMobil, Bank of America, Coca-Cola, DuPont, Monsanto, and Nestlé (which has the dubious distinction of making both lists) are WEF Industry Partners.

How about climate change? This is now an issue that regularly features ominously in the WEF’s “Global Risks” annual report. Curious, then, that in addition to Shell and ExxonMobil, the Forum’s Industry Partners include most of the largest oil and gas companies in the world, from BP and Chevron to Gazprom and Saudi Aramco. “Carbon Majors” a peer-reviewed study in the scientific journal Climatic Change, lists the 90 entities most responsible for extracting the fossil fuels burned over the past 150 years. The top six are WEF Industry Partners.

Despite the carefully crafted words of concern for the poor and hungry, the WEF’s many food corporations – from Unilever and Pepsico to Cargill and General Mills – have actually parleyed the misery of the food crisis into further control over the food system, as well as spectacular profits. During the 2008 food crisis, the organization GRAIN released a report revealing that “nearly every corporate player in the global food chain is making a killing from the food crisis …. Such record profits … are a reflection of the extreme power that these middlemen have accrued through the globalisation of the food system. Intimately involved with the shaping of the trade rules that govern today’s food system and tightly in control of markets and the ever more complex financial systems through which global trade operates, these companies are in perfect position to turn food scarcity into immense profits.” (1)

Global banks also played a pivotal role in precipitating – and making a killing off – this food crisis. According to an investigative report by Frederick Kaufman, Goldman Sachs instigated a “global speculative frenzy” on food which “sparked riots in more than thirty countries and drove the number of the world’s “food insecure” to more than a billion …. The ranks of the hungry had increased by 250 million in a single year, the most abysmal increase in all of human history.” (2) Needless to say, scroll down to “G” in the Industry Partners list, and Goldman Sachs is there.

The fact is, digging into any of the crises we face will reveal the complicity of the very corporations that the World Economic Forum represents. A study conducted for the UN, for example, estimated the combined environmental externalities of the world’s 3,000 biggest companies to be $2.2 trillion in 2008, “a figure bigger than the national economies of all but seven countries in the world that year.” (3)

These are just a few of innumerable possible examples. The corporations represented by the World Economic Forum are the agents principally responsible for destroying the planet, ravaging livelihoods, and literally starving people, all while aggrandizing unprecedented profits into the hands of an ever-tinier super elite. Seen in this light, all the burnished social and environmental concern-speak of the WEF is so much vacuous corporate swagger, the crudest sort of greenwash. Even though these companies actually spend huge amounts of capital and energy fighting environmental regulation and the citizen’s groups who are suffering their abuses, they simultaneously pursue a strategic embrace of environmental discourse and narratives; they accept the existence of the problems while promoting privatized, technocratic strategies for addressing them. These strategies pivot between those that assign responsibility for causing and fixing the problems to individual consumers, and those that position the corporations themselves as crucial players in the common cause of “improving”/”cleaning” the environment – the same one, incidentally, that they destroyed.

The absurdity of this schizophrenia reaches extreme limits: the WEF is solemnly concerned about global warming because – get ready for it – it represents one of the biggest threats ever to global trade and corporate capitalism! The primary perpetrator of global warming is now portraying itself as a victim. In WEF-land, global warming is like a mysterious, autonomous, alien force invading from afar, without cause or explanation. It “affects us all”, so we must all roll up our sleeves and unite – fossil fuel corporations included – in the battle against a common external foe.

There is, however, one part of the WEF’s mission that is being genuinely fulfilled: “building sustained economic growth”, code for increasing the power and wealth of its corporate partners. That this is the first of the “challenges” described in the WEF mission statement is no accident. Economic growth might seem an odd mismatch to the other issues, like social welfare and environmental sustainability, but the WEF has clearly embraced the notion that endless growth is not only compatible with environmental sustainability, it is actually necessary for it. That this myth has been thoroughly debunked seems to have conveniently escaped the WEF’s notice. (4)

This farce would be laughable but for the immense power and enormous control commanded by the corporations and banks the World Economic Forum represents. When the WEF promises to address agriculture, food security, environmental sustainability, and the like, we should be very worried for exactly those things. Peel away the eco-charity veneer and the WEF’s actual mission stands naked: advance the power, growth, and wealth of the corporate rulers of the world.

In no way should The World Economic Forum be allowed to insert itself as a legitimate voice on the resolution of the very issues that its agenda – the perpetual growth of its partners – precipitates. On the contrary, it should be fiercely resisted – precisely what the alternative World Social Forum, Occupy WEF, and other anti-globalization groups were created to do. (5)

(2) Kaufman, F. (2010) ‘The Food Bubble: How Wall Street Starved Millions and Got Away With It’, Harper’s Magazine, July, http://frederickkaufman.typepad.com/files/the-food-bubble-pdf.pdf

Localists of the world, unite! An urgent call to join the movement against the TPP & TTIP
The Super Bowl of Subsidies