You are here: Home / Free Trade and Globalization / Current Trade Treaties: “a revolution against law” 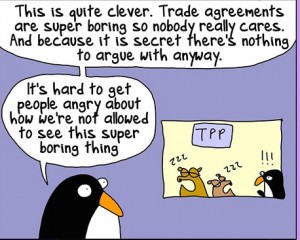 A respected human-rights expert at the United Nations, Alfred-Maurice de Zayas, has joined the global movement opposing trade treaties like TPP and TTIP. And he has novel and powerful legal arguments.

In international law, de Zayas says, there is a hierarchy of agreements, and at the top is the UN Charter: “in case of conflict between the provisions of the UN Charter and any other treaty, the Charter prevails.” In other words, trade treaties that lead to a violation of human rights — or breach any other obligation set out in the UN Charter — are legally invalid. Most countries have signed onto human rights treaties, but “they have also entered into trade and investment agreements that hinder, delay or render impossible the fulfillment of their human rights treaty obligations.”

De Zayas is especially concerned about Investor State Dispute Settlement (ISDS) clauses, which allow corporations to sue governments over laws or regulations that might diminish expected profits. Such mechanisms, he says, “actually constitute an attack on the very essence of sovereignty and self-determination, which are founding principles of the United Nations.” In fact, the International Covenant on Civil and Political Rights requires these kinds of disputes to be decided by independent, transparent and accountable tribunals. “Allowing three private arbitrators to disregard international and national law … is tantamount to a revolution against law.”

De Zayas notes that of the 608 known arbitration awards, many “have overridden national law and hindered States in the sovereign determination of fiscal and budgetary policy, labour, health and environmental regulation, and have had adverse human rights impacts… including a ‘chilling effect’ with regard to the exercise of democratic governance.”

The long-term consequence of free trade and investment treaties, he adds, is “an international order ruled by investors, speculators and transnational enterprises lacking democratic legitimacy”.

What does de Zayas think should be done? Among other steps in his ‘plan of action’, he calls on governments to:

• Ensure that all trade and investment agreements – existing and future – represent the democratic will of the populations concerned. Negotiations must not be secret or ‘fast-tracked’, but should instead be accompanied by broad public consultation and participation;

• Abolish ISDS, and refuse to comply with any existing ISDS awards that violate human rights;

• Ensure that all trade and investment agreements recognize the primacy of human rights and specify that, in case of conflict, human rights obligations prevail;

• Ensure that trade and investment treaties do not interfere with the ability of governments to conduct domestic budgetary and fiscal affairs.

• Resist the ‘siren call’ of lobbyists for transnational corporations and banks that make overly-optimistic projections of growth and development.

De Zayas is not advocating an end to international trade and investment, but an end to the “grand global casino where investors rig the system to guarantee that they always win…. The rule of thumb,” he says, “should be to: (a) give to corporations what belongs to them – an environment in which to compete fairly; (b) give back to States what is fundamentally and inalienably theirs – sovereignty and policy space; (c) give parliaments what belongs to them – the faculty to consider all aspects of treaties without undemocratic secrecy and fast-tracking; and (d) give to the people what is theirs: the rights to public participation, due process and democracy.”

De Zayas acknowledges that modifying or terminating trade and investment agreements won’t be easy. But he points out that slavery and colonialism – today seen as crimes against humanity– were for centuries legal and central parts of the economic order. “Just as other economic paradigms were abandoned, eventually investor-state dispute settlement will be recognized as an experiment gone wrong, an attempt to hijack constitutionality.”

Alfred-Maurice de Zayas is an American lawyer, writer, historian, a leading expert in the field of human rights and international law, and a retired high-ranking United Nations official. In 2012 the UN Human Rights Council appointed him to the post of Independent Expert on the Promotion of a Democratic and Equitable International Order. To read the full text of Mr. de Zayas’ statement, click here.