You are here: Home / Technology / Convenience, Community, and Late-Stage Capitalism 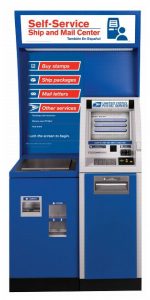 Yesterday I went to the post office to mail a package to my daughter overseas. She’s been in the military for years, so I’m familiar with the process. Hauling the big box on my hip, I greeted the post mistress and asked her for a customs form.

“Oh, you have to do that online now,” she said. “Because of international regulations, we aren’t allowed to use paper forms anymore.”

So I wrestled the box back out to the car and drove home, to spend an hour of stroke-inducing frustration figuring out how to find and complete the form. I succeeded eventually; I filled out the form, took the box down to the basement, where I keep a rusty produce scale that I use for canning, weighed it, and printed the form on our home printer. Then I drove six miles back to the post office. Once more I handed the box past the pandemic plastic sheeting.

“Looks good!” she told me and took the box.

I thanked her and left.

This little interaction has made me reflect on the three Cs that I’ve used for the title: convenience, community, and capitalism.

We’re told that things are online now “for our convenience.” To be fair, I suppose that in the future it will be convenient to just reprint my daughter’s mailing address – presuming I can remember the byzantine username and password that were required, and I have ink in the printer, and my scale hasn’t rusted through, and I don’t know, the Kessler effect hasn’t taken out the internet. Sure, it’ll be convenient, and I’ll be saving a tiny bit of a tree by using only one piece of paper instead of eight.

But what is the cost of this putative convenience? One cost is a loss of community. In fact, convenience as we understand it today is in direct opposition to community. It’s practically a law that the more inconvenient something is, the more it engenders community. For example, the convenience of the internet allows me to look at and do things my neighbors will never know about; the inconvenient party telephone ensured that everyone knew what everyone else was doing. Food delivery versus farmers’ markets, ebooks versus visits to the library, manufactured houses versus barn-raisings – these conveniences all contribute to the loss of the kind of community, for good or ill, we used to have. Even central heat, a convenience we take for granted, has allowed families to be isolated in their own rooms all winter, rather than gathering around a source of heat.

At the post office, normally I would have chatted with the postmistress, who’s a nice woman. While she was weighing things and I was filling out the form, she might have asked about my daughter, and I would have inquired about her family. I would have appreciated her skill and been grateful for her answers to my questions about customs, costs, and insurance. She would have felt herself to be an expert valued by our community as a result.

As it was, she served two functions in our interaction, both of which could have been fulfilled by inanimate objects: she told me she couldn’t help me, which a piece of paper taped to the window could have done, and she received my box, which a bin would have managed just as handily. Her years of experience with the post office and our community, and her cheerful and authoritative demeanor, were all unnecessary. How long will she have a job when she can be replaced by things that don’t require a paycheck?

And that brings me to late-stage capitalism. The term is vague and means different things according to who is using it, but it generally refers to unsustainable absurdities and injustices in our current business practices.

I don’t know why forms have to be filled out online, but whoever made the decision probably thought it was justified for reasons of cost. They might claim that the postal service can’t survive if it doesn’t turn a profit, and the only way to turn a profit is to cut costs, right? We know the postal service is struggling financially for many reasons, but one big reason is that it is expected to be a business and not a service. The attitude that everything in a society, even public services, should pay for itself and in the process enrich its stockholders is typical of late-stage capitalism. This attitude affects our institutions of higher education and even public schools, more and more of which are being turned over to private charter companies. It affects health care, where hospitals have to make money off sick people for their parent companies; it affects infrastructure – every summer I see neighbors driving down our road on the back of their pick-up, shoveling gravel into the latest crop of potholes, doing the job that the county no longer does.

The way late-stage capitalism reduces costs is by shifting them to the consumer. Last year, all I needed in order to mail a package overseas was a pen, and even then I could have borrowed one from the clerk. Now I need to have my own computer with internet connection, my own printer, and my own scale, as well as some basic familiarity with using the internet to do business. I know perfectly well that there are people in my community who don’t have all of those things but who are of the demographic group most likely to have children in the military. How are they going to send packages to their sons and daughters? The “convenience” of doing other people’s responsibilities at one’s own home is just a lie to induce compliance while services are removed, more people suffer, and a few people get rich. And a passing “Thank you for your service” is supposed to compensate for this injustice.

The result of the spread of “convenience” is atomized households, each with its own printer and scale, its own wheelchair and hospital bed, its own road paving equipment and computer for online education – for those who can afford them. No one ever has to leave home again – except the poor, and where can they go to get services? Because of the tyranny of late-stage capitalism, we lose community and gain a spurious convenience that weakens our connections and drives a wedge ever more deeply between the haves and the have-nots.

Image, US Postal Service: “Use convenient alternatives to going to the post office”

Our Robot Overlords
We Don’t Farm Because it’s Trendy: Farming is not new to Black people

Damaris Zehner is an associate professor of English at Ivy Tech Community College of Indiana. She is the author of The Between Time, a collection of essays, and a contributor to blogs such as Resilience.org and Internetmonk.com. She has lived and worked on four continents, equipping educators, translators, and gardeners with training and supplies. Her blog, Integrity of LIfe (www.damariszehner.com), focuses on sane living in the present and in the coming post-industrial world.