You are here: Home / Food and Farming / Connecting over Soil 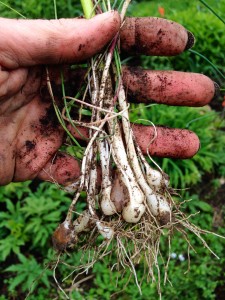 It’s no secret that there’s a divide between the global North and South. Most people know about the huge wealth gap between the industrialized and so-called “developing” worlds, and that rates of pollution, resource use, greenhouse gas emissions – and much more – vary widely between them. But there’s another gap, one that’s rarely discussed in the media, or even by NGOs. It involves changing attitudes to farming, to the land and the soil – something worth considering in this UN-designated “International Year of Soils.’

All over the Western world, increasing numbers of people are leaving their desk-bound lives to rediscover the joys of getting their hands dirty. The passion for soil is on the rise as more and more people grow food on their balconies or rooftops, or turn their lawns into a mixture of wilderness and vegetables. People are also reaching out to farmers, joining Community Supported Agriculture schemes or starting food co-ops. The permaculture, ecovillage and transition movements now have huge followings, with thousands of people undergoing training and reconnecting to each other through growing food. Interest in slow food, organic food, agroecology and regenerative agriculture are also increasing. Central to all these movements is localization – the shortening of distances from the farm to the table. At same time that local food economies rebuild the relationship between consumers and farmers, they encourage highly diversified organic, small-scale agriculture, contributing to sustainable food systems.

Things are very different in the global South. While nearly half the population is still connected to the soil, farmers are being encouraged to leave the land by the millions. Throughout the developing world, food producers are struggling with a range of problems, including debt, GMOs, soil degradation, climate change and dependency on an increasingly volatile global marketplace. Just as importantly, they are being made to feel ashamed of their farming traditions, ashamed of having their hands in the soil. Western-style schooling, the media and advertising all romanticize an urban consumer lifestyle, while farming is seen as “backward” and primitive. I witnessed this first-hand during the many years I lived in Ladakh, or “Little Tibet”. Sometimes the message was subtle, sometimes it was overt, like in a schoolbook I came across, which said:

“The pace of development of our villages is not very rapid. In the developed countries, such as the USA and Canada, only a few persons are farmers. This small group of farmers not only produces food for the entire population but also exports it to other countries. In our country, the majority of the people living in the villages are engaged in agriculture but their income from agriculture is not sufficient to enable them to lead a happy life.”

In Ladakh, as elsewhere in the South, the overall trend is a shift away from a life connected to the soil and towards urbanization. This is continually reinforced by the notion that in the modern, glittering cities of the West, people enjoy incredible leisure, wealth and power. Rural people don’t hear about our epidemic of depression, about the pollution, the escalating rates of cancer, the poverty and unemployment, the senseless violence. The result is what I have described as the “psychological pressure to modernize.” Combined with political and economic pressures, the result is an exodus for the city: it is estimated that by 2050 there will be an additional 400 million urban dwellers in India, nearly 300 million more in China, and over 200 million more in Nigeria, with similar increases expected throughout the less-developed world.[1] A few may find the city to be the consumer paradise that was advertised, but the vast majority will end up in one of the urban slums appended to the South’s mega-cities. Cut off from the land and forced into ruthless competition for the few available jobs, their prospects are dismal.

We urgently need a media campaign throughout the South that puts soil, seeds and farmers at the center, and that makes visible the many trends in the West that are diametrically opposite to what is being foisted on millions of land-based people worldwide.

Fortunately, many of the agricultural traditions of the South have not yet been lost, and there is a lot left to build upon. There are also a growing number of indigenous grassroots organizations bringing together small-scale farmers to share knowledge and build solidarity. One of these, Via Campesina, has more than 200 million members in 73 countries. Movements like these can be strengthened and expanded, thereby counteracting the mainstream messages that drive people from the land.

Around the world, soil is common currency. It binds us to each other and to the earth. This currency lies at the heart of a movement towards rebuilding local economies. I call it ‘the economics of happiness’, because at the deepest level localization reweaves our spiritual connection to others and to nature, something that is essential for our wellbeing. People all over the North are discovering its benefits, while people in the South are still being told that McDonald’s is ‘cool’, and that farming is not. It’s time to close the information gap.

An Eco-Farm in Myanmar (Burma): Saving the World with Organic Agriculture
Branding Tradition: A Bittersweet Tale of Corporate Capitalism