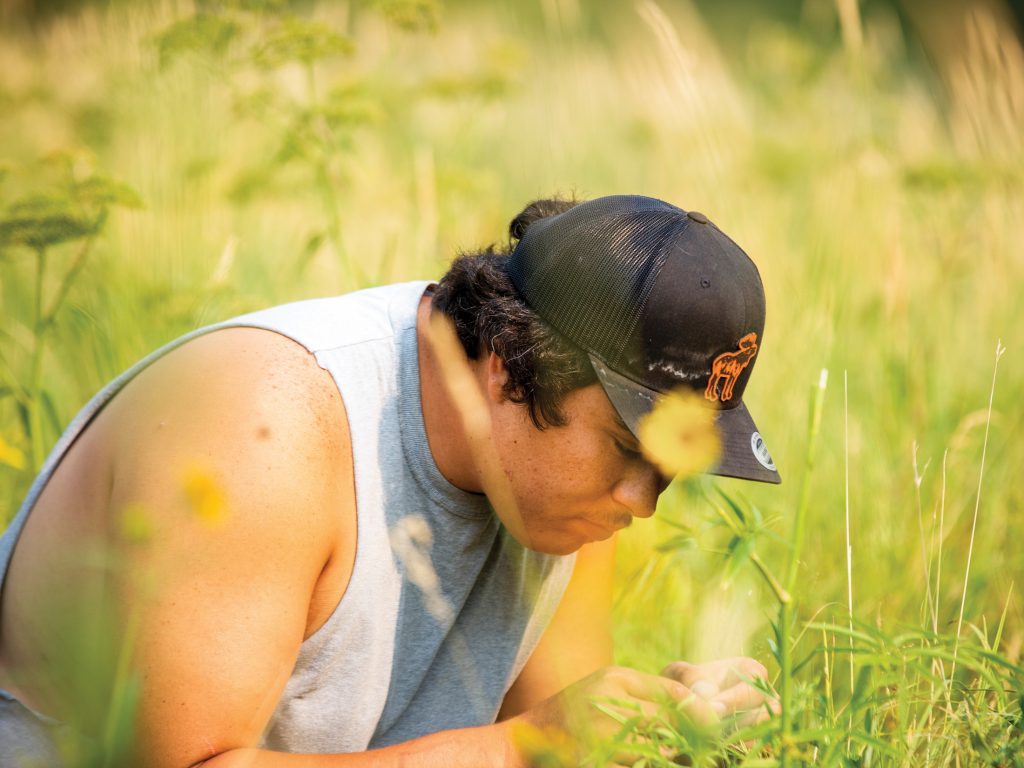 Laughter and the chirping of grasshoppers mingled on a mild August morning as several young women, members of the Aaniiih and Nakoda tribes, searched for sweetgrass, running vegetation through their fingers as they tried to determine whether they held satiny sweetgrass or rough sedges. One held strands of sweetgrass in her mouth as the plant’s scent, reminiscent of vanilla and oak, drifted through the air. Sweetgrass is braided, used in smudging ceremonies and presented as a gift by many Indigenous people, both here on the Fort Belknap Indian Reservation as well as across the United States and Canada. “Can I come back next summer?” Savannah Spottedbird, a 17-year-old member of the Nakoda Tribe, shouted across the meadow, waving long blades of grass. “I want to do more of this!”

The moist meadow was surrounded by stands of aspen; sweetgrass is often found in wetlands and along riverbanks, where it stabilizes the soil against erosion. Fort Belknap encompasses 623,000 acres of mostly prairie grassland in north-central Montana. The reservation is home to both the Aaniiih (Gros Ventre) and Nakoda (Assiniboine) tribes, which share a single government as the Fort Belknap Indian Community. Tyrus Brockie, a 22-year-old member of the Aaniiih Tribe, stood near Spottedbird, busily snipping off seed tops and dropping them into a paper bag.

The young adults were part of the Fort Belknap Indian Community Grassland Restoration Project, a partnership between the reservation and the Bureau of Land Management (BLM). Gathering seeds from healthy plots is the first step in restoring dry, dusty degraded land in the area, a visible mark of colonization. Changes in land use here can be traced back to the Dawes Act of 1887, when the federal government subdivided tribal lands and tried to force assimilation into U.S. society.

The grassland restoration project was created to revitalize the land, but it also helps the young adults who do the work. “They may not know it yet, but it’s empowering for them,” said project coordinator Dan Werk (Aaniiih), the Tribal Historic Preservation Office’s cultural liaison. “These youth are going to be able to take ownership of healing the land at Fort Belknap.”

The idea for the project began in Alberta, Canada, where program director Cristina Eisenberg, who is of Raramuri and Western Apache heritage, has led similar fieldwork with the Kainai First Nation since 2013. “To me, what matters most is empowering young people,” said Eisenberg, an ecologist at Oregon State University. In 2018, the BLM’s plant conservation and restoration leader introduced Eisenberg to Wendy Velman, the head of the BLM’s botany program for Montana and the Dakotas who was working separately to partner with tribes on seed collection. The two women were invited to meet with the Fort Belknap Tribal Council in 2019, and they began the grassland restoration project last year.

The council wants the project to assess and collect seeds from the reservation’s most sensitive plant populations. The plants are mostly used for medicinal purposes, and, except for sweetgrass, their names are kept private. Seeds from five other species were also collected: western wheatgrass, bluebunch wheatgrass, junegrass, Sandberg bluegrass and green needlegrass.

The BLM funds the partnership along with private donations and the Society for Ecological Restoration, a conservation organization. The agency prioritizes native plants in restoration projects through its national native seed collection program; seeds from the region in question typically germinate better than seeds brought from afar. But the seed supply is limited. “With the federal government wanting to put more native plants out there,” Velman said, “who better to tell us what’s supposed to be on the land than those that have been here forever?”

Last year, the grassland restoration project collected seeds only from federal lands, but this year, the council invited the program to use tribal lands, too. There were clear differences in the seeds collected from the two areas, possibly owing to past grazing or fire. The BLM plots next to the reservation were struggling in what turned out to be the worst drought in at least 30 years. “Everything was pretty much dead by the second week of July,” Eisenberg said. But many of the tribal plots flourished into the summer, ultimately accounting for the majority of seeds collected.

Twenty-three pounds of seeds were collected this year, stored in neatly labeled paper bags, and shipped to a U.S. Forest Service cleaning facility in Oregon. The BLM owns seeds collected on public lands, while seeds collected on tribal lands belong mostly to the tribe, which has agreed to keep the first 10,000 seeds of each species at federal facilities in Washington and Colorado as part of a national native seed collection.

Still, the vast majority of the seeds — there are 181,000 in just one pound of green needlegrass — will go back to Fort Belknap. The tribal council can sell the seeds to the BLM, use them to restore degraded land or perhaps start its own native seed-growing business. Project leaders hope to plant some of the seeds on tribal lands in a few years, once the tribal council approves a restoration plan and the plots are ready for planting. The BLM eventually plans to sow seeds in the region as well.

Pronghorn darted away from a dirt road, white hindquarters flashing, as a gaggle of field technicians drove to their first site of the day, a prairie field in the reservation’s southeast corner. It was August, the end of the season, and they needed to collect the game cameras they had set up there to study the impact wildlife have on the site’s plants.

The air was humid and smoky, redolent of bug spray and sage, primed by an early morning rain. Tyrus Brockie, the junior field technician, wore gaiters over his boots to protect against rattlesnake bites. He pointed toward his uncle’s ranch, where he helps run cattle. Brockie had become newly fascinated by the landscape: “Now, I’ve got my head down all morning,” looking at the grasses, he said. He’s considering studying natural resources at the Aaniiih Nakoda College: “This job makes me want to go and learn.”

Young participants in the restoration program, who are paid, can progress from community fellows to entry-level, then senior, field technicians. Community fellows like 22-year-old Sakura Main spent a week with the team this summer, alongside her little sister and cousin, while senior technicians like Brockie work the full eight-week field season. “I didn’t know restoring grasslands was so important,” said Main, an enrolled Aaniiih member. “When it’s in your backyard, you don’t always notice it.”

Their next big project was creating a restoration plan for a desolate 1,000-acre plot of tribal land choked with invasive noxious weeds near Snake Butte, a prominent landmark. The land’s natural vegetation was destroyed when the plot was plowed and planted with a wheat crop that recently failed. Now, tribal leaders hope to annex the Kirkaldie Tract, as it’s called, to a nearby bison pasture, but it needs to be revegetated before it can support the animals. The tribes have begun reintroducing bison to their traditional grazing lands for ecological and cultural revitalization.

Werk often speaks of his grandparents, who guide his vision for the program. He recalls them talking about riding their horses from one end of the reservation to another back in the 1940s and ’50s, when no fences impeded the journey. As they aged, he said, they were comforted by memories of the freedom that came from moving through a landscape unmarred by barriers. Werk wants others to experience that same freedom — to someday know what it’s like to drive across intact prairie “and see nothing but native grasses,” he said. “That’s all going to be part of healing.”

The program also promotes cultural connection with the help of speakers like Dan Werk, the cultural liaison. The speakers share tribal stories, traditions and history along with the seed collection. Werk enjoys seeing the participants work together, giggling as they learn how to create botany plots on top of Snake Butte and search for fossilized seashells in prairie coulees. The teens and young adults are referred for field work by Fort Belknap Social Services and the 477 Employment and Training Program, a Bureau of Indian Affairs initiative created to reduce tribal unemployment. Many of them face challenges ranging from falling behind in school to battling addiction. “This program is just one piece of the puzzle to help our kids, help build their self-worth and self-pride,” Werk said.

This post originally appeared in the October 1 issue of High Country News.

Industrial Agriculture is No Solution for Africa
Localization and Carfree Cities

Kylie Mohr is an award-winning reporter based in Montana. She writes for High Country News, as well as National Geographic, Hakai Magazine/The Tyee, Montana Free Press, Montana Quarterly, The Copenhagen Post, and many others. Her work has also appeared on CNN and NPR.