You are here: Home / Food and Farming / Can small-scale farmers feed the world? 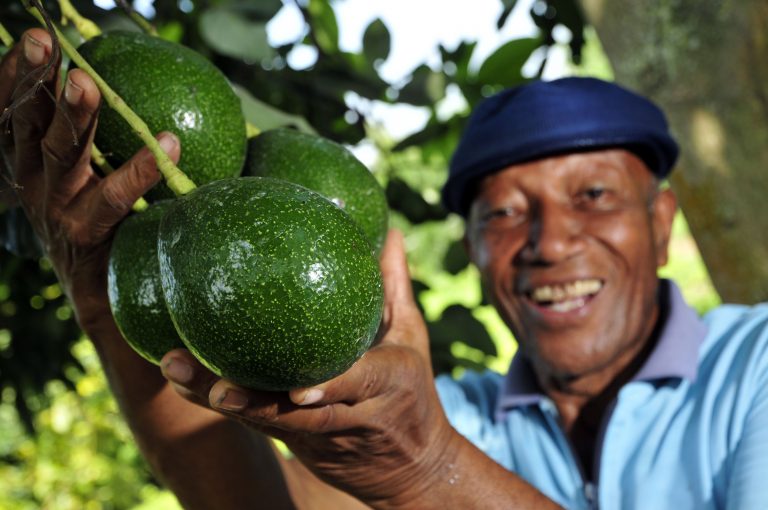 One of the things I wondered about a lot during my first months of work in the food system was productivity. Growing up in a Minority World country, practically all of my food came from large-scale, industrial farms. As a result, I – like many others – believed for a long time that industrial agriculture a necessary evil, an unfortunate requirement given how many people now live on the planet. Once I learned about the importance of small-scale farming for biodiversity and cultural preservation, I still wondered whether these smaller farms would be able to “feed the world.”

I want to take a bit of time to explore this question. There is ongoing controversy about exactly what percentage of the world’s food is produced by small-scale and peasant farmers. It’s a difficult question to answer, but an incredibly important one. If it turns out that small-scale agriculture does, in fact, feed the majority of the world, then that would be a huge blow to the industrial agricultural system, given its widespread environmental and social harms. In recent years, researchers have attempted to answer this question. But a couple of key studies have emerged, pointing us in the wrong direction, and creating dire consequences for policy-making. Let’s dive in.

They assert, based on available data, that 50 percent of global crop production for human consumption can be attributed to small-scale farms under 5 hectares (this is relatively uncontroversial in the research). Then, they added in food resulting from practices like hunting and gathering, fishing, pastoralism, as well as small-scale urban and peri-urban food production, which accounted for an additional 20 percent of food consumed. These forms of food production are mostly informal – and chronically undervalued – so it’s difficult to ascertain exact figures, but they are nonetheless important ways that people feed themselves around the world.

In the past few years, two papers have been published that attempt to “debunk” this 70 percent statistic. The two papers, published by Vincent Ricciardi et al (2018) and Sarah Lowder et al (2021), both claim that small-scale farmers account for just 30 percent of global food production – quite a jump down from 70 percent. This has led to a slew of headlines implying that these findings prove that small-scale agriculture is inefficient and incapable of feeding the world and that we should invest in industrialized methods instead. As a result of these papers, the UN’s Food and Agriculture Organization (FAO) has shifted its position from 70 to 30 percent, despite the fact that the papers are full of methodological errors and assumptions that warrant further scrutiny before being universally accepted.

Let’s take a look at this research, starting with Ricciardi’s paper. Although they aimed to debunk ETC Group’s statistic (calling it a “zombie statistic”), they were actually answering a completely different question than the one they claimed to be addressing. They measured crop production for small-scale vs. industrial farms, completely neglecting how much of that food is going to feed people. The reality is that industrial farms divert a significant percentage of crops to biofuels, animal feed, and other non-food uses. Even calories grown for animal feed, which could be argued to still be contributing to food security, are highly inefficient; nonprofits GRAIN and IATP estimate that for every 100 calories fed to animals, only 17 to 30 end up in the meat that humans consume. Measuring production alone doesn’t tell us much about food security, which is the implied question at hand.

On top of that, their dataset includes only 55 countries (or two-fifths of the global population). Over half of these countries are European, where small-scale farming is, indeed, more marginal. The researchers ignore large swaths of Africa, South East Asia, and other regions where small-scale farmers account for a significant percentage of food production. And yet they make sweeping claims about global peasant food production.

Ricciardi’s team referenced another study that uses a dataset that includes far more Majority World countries. They found that if they applied their methodology to this dataset, they would reach the conclusion that 76 percent of food calories are produced by farms under five hectares, which is significantly higher than even ETC Group’s original estimate. Either way, it’s nonsensical to rely on a dataset that erases the vast majority of countries where small-scale farmers exist, neglect to include the majority of food production methods they employ, and then make claims about their ability to feed the world.

But the reality is that not all farms are equally productive. In fact, Ricciardi and his team later found that small farms tend to outproduce larger ones per hectare. Second, for many large farms (more so than smaller farms), a significant percentage of produced calories are diverted to biofuels, animal feed, and other uses. Again, Ricciardi et al. found that farms under 2 hectares devote a greater proportion of their production to food, while farms over 1,000 hectares have the greatest proportion of post-harvest loss. Simply measuring production doesn’t tell us very much about food security. And yet, production remains the dominant metric.

Both papers also define a “small farm” as a farm under 2 hectares, when the FAO itself has stated that creating a standard cutoff for farm size is unwise because what is considered “small” varies from country to country.

This debate is incredibly important. These two papers have led to a slew of frustrating headlines such as this one from Hannah Ritchie of Our World in Data, which reads “Smallholders produce one-third of the world’s food, less than half of what many headlines claim.” When you search “how much of the world’s food do smallholder farmers produce,” these are the results that come up, based on research that is, at best, deeply flawed.

It’s important to explore both sides of the debate. We need more research to determine which agricultural pathways we should pursue, taking all externalities and environmental impacts into account. But these papers don’t add to that debate in a meaningful way. Their assumptions make their research basically useless for answering the question at hand. And the implications of these papers for justifying industrial agriculture are dangerous. We cannot measure success on production alone. We must begin widening the metrics to include biodiversity, environmental impact, and equity.

Finally, the way the debate has been framed thus far places the onus unfairly on peasant and small-scale farmers to prove they can produce enough food to feed the world (even though we have ample country-level data showing that small-scale farms outproduce large-scale farms). We must ask, then, why the onus is not placed on industrial agriculture to justify why the percentage of the calories they deliver to people is so low; why there is so much waste; why so many calories are inefficiently allocated while using such vast amounts of land and resources.

It’s also likely a contributing factor that those who are in positions of decision-making power are in the Minority World, where most of the food is produced industrially. It just seems implausible to them that small-scale farming really can be more productive per-hectare than large, industrial farms. But most of the world does not get their food from industrial sources. Some believe that they should. But the industrial system’s efficacy is far from proven, especially when loss, waste, and non-food uses are taken into account. In fact, the evidence points squarely in the opposite direction.

It’s important for us all to ask, what would it mean if industrial agriculture can’t (and doesn’t) feed the world? As the climate crisis deepens, we are collectively waking up to the immense harms of the industrial system – environmental degradation, corporate consolidation, exploitation, and cultural erasure. What would it mean if we actually have the story wrong? Either way, the clock is ticking, and the future of our food systems depends on our finding the right answer.

This post first appeared in A Growing Culture’s newsletter, Offshoot.

Of George Monbiot, mathematical modernism and the case for agrarian localism
Food sovereignty on the Navajo Nation

A Growing Culture is a non-profit working to unite and grow the food sovereignty movement. They publish Offshoot, a newsletter about the future of food – includinh what a just food system looks like, whether individual or collective mobilisation is more effective, and how critique and hope are balanced.