You are here: Home / Community / Can Localism Restore Sanity to Politics? 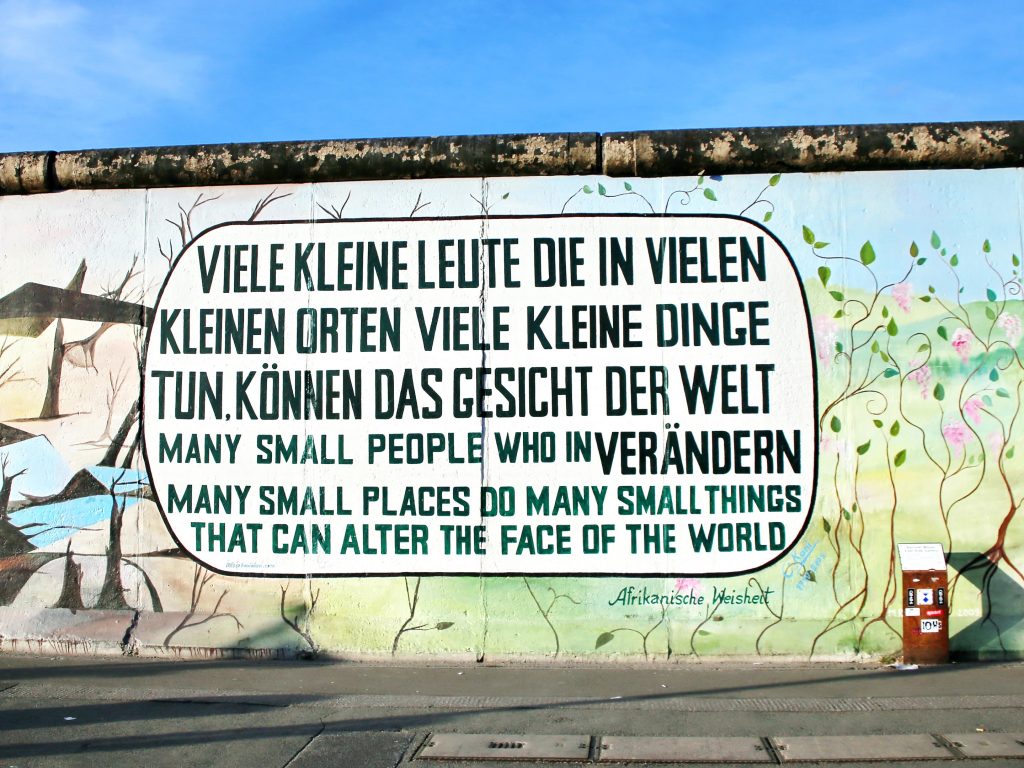 I live in one of those old towns that was not built for cars. Its Main Street is narrow, hedged in with historic stone houses and walls. As commuter traffic has intensified over the past several years, it’s become increasingly dangerous to walk along Main Street.

The mayor of my tiny Virginia town has worked incessantly to fix this, by fostering walkability and traffic-calming measures since he ran for town council in the 1990s. I’m determined to help him: I want to walk with my daughter to the playground or the farmer’s market without fearing for her safety.

Our mayor is liberal. He drives around town with an Obama ’08 bumper sticker on his car. I am a conservative, pro-life Christian; in 2016, I voted for Evan McMullin for president. But our partisan political differences mean nothing when it comes to caring for this town and making it better. Here at the local level, our interests intertwine: They are practical, achievable, even apolitical.

This is localism, a bottom-up, practically oriented way of looking at today’s biggest policy dilemmas. Instead of always or only seeking to fix municipal issues through national policy, localism suggests that communities can and should find solutions to their own particular problems, within their own particular contexts. The best walkability solutions for Washington, D.C., may not work in my town. Urban revitalization efforts in Detroit will need to look different than those efforts employed in rural Iowa.

If we’re to find hope and unity for our politics in this fractured era, localism may be the perfect place to start.

It hands ownership and power back to those who are most likely to feel hollowed out and powerless in the face of federal stasis. As the Brookings Institution fellows Bruce Katz and Jeremy Nowak write in their new book The New Localism, this approach empowers postindustrial cities and dying towns to fix their problems from within, without federal bureaucracy or funds.

Localism manifests itself in a variety of forms. The farmer and author Joel Salatin has seen localism thrive within the sustainable agriculture movement: States like Wyoming and Maine have campaigned for “local food freedom laws,” which enable farmers to sell certain goods to neighbors without as much federal oversight or bureaucratic red tape. Private philanthropists, state representatives and community activists have all banded together to garner opportunities and funding for young and beginning farmers in their own communities.

The same principles apply to urban planning, as Chuck Marohn, the president of Strong Towns, has learned. After decades working as a professional engineer and urban planner, Mr. Marohn decided our current planning system hurts towns and cities far more than it helps them. So he started the Strong Towns website and podcast to facilitate dialogue within individual communities. He travels the country introducing mayors, planners and citizens to infrastructure and planning approaches that are, in his mind, largely apolitical.

“When I go talk at the local level, when people come in at the start, they bring their left-right paradigm with them,” Mr. Marohn said. “But as soon as we have this conversation about strong towns, making things local and making government functional, things make sense. People no longer use left and right talking points.”

Localism often manifests itself in local-scale economic measures or laws. Mr. Marohn has found that many of the most helpful infrastructure fixes for impoverished towns and cities are small, low budget and gradual — such as doing street maintenance, planting trees, building crosswalks and cleaning up parks.  But localism can also display itself in greater elasticity among private philanthropy, public policy and the financial sector: as Mr. Katz and Mr. Nowak document in their book, private businesses and philanthropies have worked alongside city governments to achieve important reforms in places like Indianapolis, Pittsburgh and Chattanooga, Tennessee.

A deeper challenge to localism, as fewer Americans get their news from the local press, is the warlike rhetoric that dominates our national news cycle. We are more likely to know about Mr. Trump’s latest tweet than we are about the latest town meeting.

If citizens turn off cable news and instead step outside their front doors, seeking to care for their communities, they may help fight back some of the anger that has fractured our politics. For those who volunteer together at a local soup kitchen, homeless shelter, Rotary Club or Boy Scout troop, national battles matter much less than local, tangible needs.

Rediscovering our communal identities will require unplugging from our devices and returning to the local institutions that used to facilitate a “center,” like school boards, church soup kitchens, town hall meetings and libraries. Disappearing bipartisanship may be rediscovered, as the journalist Sarah Smarsh puts it, “in direct communion, sharing a mission.”

Localism is not a perfect cure for national division, and cannot serve as a full replacement for national politics in a globalized era. But at a time in which many Americans feel disenfranchised, disillusioned and defenseless, its empowerment may act as a sort of balm.

Growing up poor in rural Kansas in the 1980s, Ms. Smarsh remembers her grandparents constantly extending help to their neighbors: “Just about every day, some widowed farmer showed up for dinner, or a stranger needed help with his car down the road, or a stray dog limped up the driveway,” she recalls. “Grandma put more potatoes in the skillet, Grandpa got his wrench, I made a warm spot in the barn for the dog to eat and heal.”

In those early years, Ms. Smarsh learned that stewardship must start at home, if it’s to be real and authentic. Those who ignore the homeless on their city streets, instead “donating money to global causes from behind their laptops,” are ignoring local wholeness in their pursuit of international well-being. And while the latter is important, it should never come at the cost of the former.

A renewed look at localist writing may give both left and right some inspiration going forward. The farmer-philosopher Wendell Berry has long suggested that vibrant local communities are a key to environmental sustainability, rural prosperity, and the health of America’s farmland. In her book The Death and Life of Great American Cities, the urbanist Jane Jacobs argued that the safest neighborhoods were those empowered to police and care for their own. The Duke Law School professor Joseph Blocher has argued recently that “firearm localism” might help conservatives and liberals find agreement on gun control.

Since moving to this tiny Virginia town, I’ve seen our mayor work for walkability, better broadband service and cleaner water. I have seen him walk the streets early and late, visiting local businesses and talking to homeowners. No matter our political dissimilarities, he is exemplifying the sort of local activism I aspire to in my own life. So even if there is plenty that could divide us, I am going to focus on what unites us: this town. Considering the deep rancor of our national politics, that gives me hope for the future.

This essay originally appeared in The New York Times.

Localization: a Strategic Alternative to Globalized Authoritarianism
Mending a History of Discrimination through “Person-to-Person Reparations”

Gracy Olmstead has written for The American Conservative, The Week, National Review, The Federalist, The Weekly Standard, The Washington Post and other publications.