You are here: Home / Free Trade and Globalization / Book Review: From Global to Local – the Making of Things and the End of Globalization 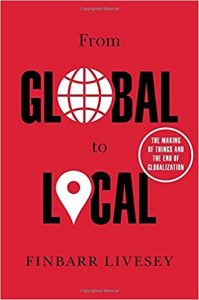 You should never judge a book by its cover. Nor, I now know, by its title. From Global to Local: the Making of Things and the End of Globalization seemed to say it all. Here at last was a significant figure – an academic from Cambridge University, no less – talking the language of economic localization. I thumbed through the table of contents with real anticipation, even excitement. Perhaps I had found a new soulmate: someone who not only understood the perils inherent in globalization, but who had come to the conclusion that we needed to head in precisely the opposite direction.

But what a disappointment! Chapter by troubling chapter, it emerges that Finbarr Livesey’s take on localization leaves the key assumptions and frameworks that underpin neoliberal economics unchallenged, and thereby keeps the fundamentals of corporate rule firmly in place.

Front and center in Livesey’s thinking are two interrelated assumptions: that progress requires economic growth, and that economic growth requires industrial production and high technology.   He is not alone in this analysis; in fact, these two assumptions encapsulate the worldview of mainstream economists, politicians and commentators. But I would argue passionately that they are simply wrong. If we allow our minds to be enclosed in a reductionist, econometric way of seeing the world, we are denying our own nature; we are denying biological realities; we are denying life itself. And we are guaranteeing ever greater social and ecological breakdown.

While I reject many, if not most, of Livesey’s conclusions, I cannot fault much of his argumentation for the end of globalization, nor his clarion call about the perils of unbridled competition. He recognizes too that Nature has its limits, and he is unequivocal about the threat posed by climate change. He provides strong arguments for the need to move away from planned obsolescence, and makes a clear case for the “circular economy”.

But there is no vision of a better world.   Though he warns against techno-utopianism, the only future he presents – albeit without much enthusiasm – is a sterile, soulless one of robots and 3-D printing, of prosperity achieved by distancing ourselves ever more from the natural world. In other words, going local digitally. There is very little questioning of what digitization will mean for our jobs, for our communities, for our sense of who we are. By contrast, we are invited to marvel at the extraordinary growth of global industrial output, resulting in the 10 billion unique products now available to us as consumers.

My own starting point could hardly be more different. As I see it, creating viable economic systems cannot happen without bringing the economy down to earth – to the interdependent biosphere that is the source of every last thing we manufacture and use. Crucially, that means recognizing the central importance of food and agriculture. Food is quite literally the bread and butter of a resilient economy, and yet unsurprisingly – and in keeping with the bias of most of the policymakers and CEOs who are shaping our future – it merits barely a mention in these pages. (Food does appear once in the index, but only as “food: printed”.)

The kind of truly localized economies that are required to prevent further cultural destruction and ecocide are nowhere to be seen in this book, but they are emerging in the writings of alternative thinkers  and in civil-society movements.  Out of the machine-made reality that comprises modern urban existence, there is a deep longing welling up: an unstoppable force towards life – towards the plants, animals, stones, earth and water that we co-evolved with. Worldwide, in a global local food movement, people are reconnecting with the sources of their food: growing their own or getting to know nearby farmers and small producers.  They are reclaiming local skills and knowledge for local needs.  Ever more people are rejecting a passive consumer culture in favor of local, face-to-face participation – with music, song, dance and theater. Rather than enriching distant investors and anonymous corporations, they are enriching their own lives by rebuilding community.

Livesey is right about one thing: globalization is coming to an end.  Let’s hope that we can liberate ourselves from the worldview that lay behind it and forge a more sane, humane and livable future.

The Problem with Techno-Optimism
What Does “Organic” Mean?