You are here: Home / Archives for TNCs 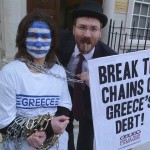 The cast of heroes and villains in Greece’s ongoing battle to save its economy varies depending on who’s telling the story. One simplified narrative depicts the German people as rich and callous overlords inflicting hardship on the downtrodden Greeks. The austerity measures they insist upon are essentially meant to punish the Greeks for spending too […]