You are here: Home / Indigenous worldview / Adivasi Economics and Re-awakening the Indigenous Mind 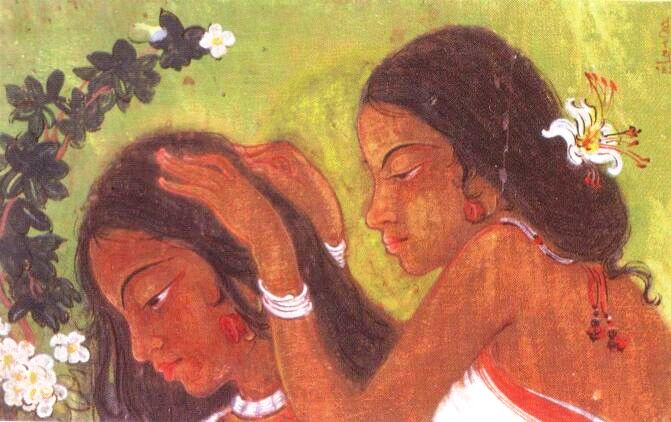 When the East India Company set up in India, the commodities they originally traded included hundreds of unique artifacts made in India, including textiles whose quality has never been surpassed. As the EIC set up a subsidiary called the Government of India for collecting revenue to send back to London, the aim gradually shifted to getting raw materials from India, including cotton, silk, indigo, jute, opium and tea, and of course financial revenue, while undermining indigenous industry so that India would become a market for British-made textiles. The quality of manufacturing was dumbed down; factories got bigger; and became sites for all the forms of industrial exploitation that Marx witnessed and analyzed in Britain.

In many ways, these trends have continued, with an increasing alienation of people from their labor. Caste and class mix in India to form an elaborate hierarchy in India’s social fabric. But, as Chomsky and others have commented, the most extreme form of hierarchy in the world is to be found in industry and corporations, from CEOs and Directors down to the contracted work-force that does coolie labor on an informalized, contract basis, without any work security — often without even getting paid.

Gandhi, Kumarappa and others in the Freedom Movement tried to reclaim the meaning of ‘industry’ to something small-scale. India still has hundreds of unique crafts and small-scale industries. With great care, energy and planning, these could solve problems of employment while simultaneously de-alienating people from their labor. In many places, small-scale initiatives are doing this.

In rural areas, these projects are displacing huge numbers of small-scale farmers, including many Adivasi indigenous communities — communities that we should be learning from about how to live more localized, sustainable lifestyles.

An Adivasi economy, in its traditional or pre-globalization form at least, was based in many ways on ecological principles. In the words of a Kond elder in Kandhamal district, Odisha, “Where are the saints in your society? In this village we are all saints. We consume little, share everything, and waste nothing.”

Consuming little involves restraint in what is taken from nature. The first time I stayed in an Adivasi village, which was a Santal village in Mayurbhanj district, I was told that no food from the fields or forest is consumed before the puja (or prayer) has been done for it. Most of the main Adivasi festivals are ‘first fruits’ festivals. For forest foods, this means some mangoes return to the soil and sprout, bamboos are allowed to flower before they are cut, and so on. ‘Taboo’ comes from the Maori word tapu, which also means ‘sacred’. Dongria Konds have a taboo or nigam against cutting trees on the top of Niyamgiri, seeing it as the abode of Niyam Raja — ‘king of rules/law’, understanding that their intact mountain summit is the source of water and fertility for miles around, which is why they have evolved such a strong movement to prevent its bauxite from being mined by Vedanta corporation. “It’s not crores of rupees up there,” says Lado Sikoka, “It’s our Maa-Baap, and we’ll defend her.” Or as a Dongria woman puts it, “We need the mountain and the mountain needs us.”

Sharing is a very important value in Adivasi societies. Communal property is more important than private property. Exchange labor is intrinsic to Adivasi Economics, with families working on each other’s fields. Modern society, under the shadow of Homo economicus, believes in self-interest and values competition highly, as a sign of a healthy market, democracy, education, sports or the legal system. Tribal democracy aims at consensus rather than competition. The aim of law is to reconcile contestants, rather than to make one party right, the other wrong. Dance is the most radical expression of democracy and sport, where communities come together with great skill and physical challenge, but there are no winners or losers.

Each village is, or was, the center of its own universe, rather than referring to outside-recognized stars for entertainment, priests to define practice, or even school textbooks to dictate standardized forms of knowledge. Knowledge of plants, cultivation, ancestors, the spirit world, songs, drum beats and far more is passed on in an oral tradition, but also constantly improvised and created anew, through a direct channeling of the unconscious, through shamanic dialogues with the spirit world, and in dreams.

In hundreds of remote places in Europe, America, New Zealand — the countries we call ‘developed’ — small-scale communities are forming, where people are moving back to the land, growing their own food, building their own houses, redefining education, economics, spirituality, rejecting mainstream values, incorporating values from indigenous cultures and India — while the Indian mainstream culture becomes more materialistic, valuing malls, cars and mobile phones above community or relationships with nature.

“We cannot go back,” people often say. “Aren’t you romanticizing tribal culture, essentializing it?” There’s a deep confusion here. No one says everything is perfect about tribal culture. Humans can be nasty everywhere. One shadow side of tribal culture is an emphasis on revenge. The Maoist conflict in India spreads like this. When Maoists assassinated men they saw as the tribal elite who were small-time exploiters, the relatives of those killed committed thousands of atrocities on their fellow tribesmen; and when the police, torture, rape and kill, their victims’ relatives are motivated to join the Maoists to get revenge. This is a manipulated civil war, where non-tribal leaders use Adivasis to fight their ideological and self-interest-based battles.

But the heart of darkness where this has happened, in Bastar, south Chhattisgarh, was the most beautiful place I knew on earth, not just in landscape, but in the tribal cultures which had adapted to and cultivated the landscape, where there was a quality of laughter, sharing and human relationship, with beauty in house construction, music, dance, food, and so many forms of expression that make me see these as among the most highly developed human cultures in the world, in terms of quality of life.

One cannot speak of the good things in tribal cultures without being accused of romanticizing them. The fact is that romance is the essence of these cultures: the art of love, the elaborate, very human and fun-filled etiquette of courting finds elaborate expression in the songs, dances and gifts that are exchanged, and in repartee.

“One cannot go back” implies that these cultures represent our past – but could it be that they are more highly developed than us, and even represent our future, if we are lucky? If we are to survive, we will have to re-learn community, sharing, restraint in what we take from nature, a slowing down of the pace of life until it fits with the rhythm of the seasons again and the flow of streams.

Should we see this as going back? In a sense perhaps it is: there is a strong need and yearning to return to a basic harmony with the ecosystems that nourish us. But also, an even greater need to go on evolving, and to imagine a far better future, based on freeing ourselves, individually and collectively, from the stale, top-down power structures that have controlled us, the financial system based on debt which has the arms industry and war at its center, from the idea of ‘development’ based on investment, industrialization, and ‘taming nature’ — an idea that hasn’t developed for 200 years, and a war-orientation we’ve failed to evolve beyond in 3,000 years of recorded history.

Can we develop to a stage based on sharing the earth’s resources, rather than fighting ever more vicious resource wars over ever scarcer natural resources? A stage that the jailed Kurdish leader Abdullah Ocalan calls ‘democratic civilization’. If we get there, the essence will be small-scale communities, skilled in the art of relating with each other truthfully, joyfully and democratically.

This post originally appeared on the website In Praise of Scaling Down, a book soon to be released by Shikshantar: The Peoples’ Institute for Rethinking Education and Development.

They Sang with a Thousand Tongues: The Poetry of Diversity
Farewell to Development: An interview with Arturo Escobar

Felix Padel is a London-born anthropologist and activist, and a great, great grandson of Charles Darwin. A strong advocate of tribal and village-community rights, he has made his home in India for the past three decades.