You are here: Home / Food and Farming / 7 billion for dinner? Here’s how to feed them 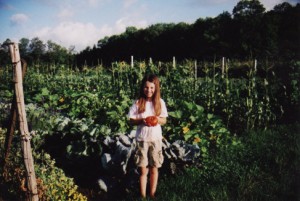 At this time of year – the Thanksgiving season – more Americans are celebrating conspicuous food consumption than giving thanks for a successful harvest.  But in either case it’s a good time to consider how to feed not only America’s population in the years to come, but the rest of the world’s 7 billion inhabitants.

Most people – even many of those who support small farms and eat organic food – believe that there’s no way to feed the global population without the use of chemical fertilizers and pesticides, fossil fuels, biotechnology, heavy equipment, and the rest of the agribusiness arsenal.  In fact, the 2013 World Food Prize  – which supposedly recognizes individuals who have improved “the quality, quantity or availability of food in the world” – went to three stalwarts of the biotech industry, including the Technology Officer of Monsanto and a lead scientist at Syngenta.[1]  (This should have surprised no one, since the sponsors of the Prize include many of the world’s largest food corporations, from Cargill, Archer Daniels Midland, Pepsico, and Dupont Pioneer to the aforementioned Monsanto and Syngenta.)[2]

But the question really comes down to this: on the planet’s limited stock of arable land, how can the most food be produced?  There’s no doubt where ISEC stands:  in The Economics of Happiness we point out that “small locally-adapted farms … produce substantially more food per acre” than industrial farms.  Vandana Shiva gave substance to that claim, pointing out that “research has shown, again and again and again, that bio-diverse small farms using ecological inputs produce three to five times more food than industrial monocultures.”

This is not a new revelation. Our book Bringing the Food Economy Home cited a 1999 study showing that small farmers worldwide produce from 2 to 10 times more per unit area than do larger, corporate farms.[3] Nonetheless, there is a persistent myth that industrial agriculture is vastly more efficient than smaller, more diversified alternatives.

This belief rests entirely on a perverse definition of “efficiency”.  The efficiency touted by the promoters of industrial agriculture has nothing to do with producing large amounts of food on a limited landbase: it’s about producing the highest yield with the least amount of human labor.  In other words, industrial agriculture is not more efficient at producing food, it’s more efficient at eliminating farmers and farmworkers.  If the goal isn’t to pull people off the land but to produce the most food, then small-scale, locally-adapted, diversified farms are the way to go.

Here’s a real-life example of small-farm productivity from our place here in northern Vermont.  It’s less of a farm than a homestead, since most of the food we produce is consumed by our family of four or exchanged in an informal barter network with neighbors – though we do have a small “cash crop” of blueberries that we sell at a nearby farmers’ market and to a couple of local stores.  Our garden area, including the blueberry patch, is less than a quarter-acre – large by backyard garden standards but miniscule in comparison to industrial monocultures.

The climate here isn’t particularly favorable (this year we had 4 inches of snow at the end of May, and a frost by early September) but we always grow a huge supply of tomatoes, peppers, cucumbers, lettuce, spinach, beans, peas, scallions, summer squash, broccoli, cabbage, cauliflower, chard, kale, asparagus, and more.  Along with the potatoes, carrots, beets, onions, garlic, winter squash, and celeriac in storage, we freeze, dry, can, or ferment enough other vegetables to meet our needs until the following year; frozen or preserved blueberries, raspberries, blackberries, apples and pears, meanwhile, provide us with copious amounts of fruit.  Much of what we don’t raise ourselves can be supplied by exchanging surpluses with neighbors.

I’m not saying this to boast since we’re not particularly exceptional: lots of people in this part of Vermont have gardens even more productive than our own, and putting up food is a tradition that goes back many generations.   What’s more, our productivity would be dwarfed by that of small farmers in parts of the world – like Ladakh – where location-specific knowledge,  building on centuries of direct experience of local conditions, is still intact. My point is only that a lot of food can be grown in a small area using nothing but on-farm inputs and human labor.  It’s very labor-intensive (just ask anyone in my family) but the food is not only plentiful, it’s nutrient-dense, healthy, and delicious.

Yet this doesn’t explain why smaller farms are more productive per acre than industrial monocultures.  One reason is that diversified farms can use the same space to grow multiple crops.  In our garden, for example, spinach, lettuce, and scallions grow from the same soil as the peas climbing the fencing above; beans grow between the rows of potatoes, and the vines from squash and cucumber plants quickly cover not only the garden paths but climb up the corn stalks and weave between the onions.  And since we use only hand tools in the garden, we don’t need to leave space for the tires of tractors and other mechanized farm equipment.

On our farm, even the garden weeds can be considered a crop.  Some of them – dandelions, lamb’s quarter, purslane, and others – are themselves edible and add to our diet.  More importantly, the weeds we pull from the garden can be fed to our goats and cows, who turn them into milk and meat.  In an industrial monoculture there are no animals to feed this volunteer crop to: instead, it is eliminated by chemical herbicides.  Other garden “wastes” – corn husks, onion tops, empty bean pods, overripe blueberries, and so on – similarly become valuable feed for our animals, adding to the net productivity of the farm.  There’s even a use for the “harmful” insects in our garden ecosystem. Rather than spray pesticides to get rid of cut worms, Japanese beetles, grubs, or potato beetle larvae, we remove them by hand and feed them to our laying hens, which convert this protein-rich food into eggs.

Another reason small farms are more productive is that the machinery on which industrial farms depend can never be as knowledgeable or as careful as humans.  When our family picks blueberries, for example, we know what each of the several varieties we grow look and feel like when they’re perfectly ripe:  berries that aren’t quite ready will be left for the next day’s picking, when they’ll be larger, juicier and better-tasting.  But the mechanical blueberry-picking machines favored by large growers can’t make such distinctions: they simply shake the entire bush and catch whatever berries drop.  A University of Florida study showed that because mechanical harvesting bruises many good berries and harvests many under-ripe ones, it yields 13 percent less marketable fruit, with “significant [additional] losses from blue and immature fruit dropped on the ground by the harvester.”[4]  In other words, farms that use machines to pick their fruit get smaller harvests; nonetheless, they are described as more “efficient” because they use less human labor.[5]

When we planted our blueberries 15 years ago, we chose varieties that were well-suited to our farm’s particular soils and micro-climate. If we had intended to use a mechanical harvester, however, we would have chosen different varieties – those that are better at withstanding machine harvesting – in order to minimize harvesting losses.  All industrial-scale farmers are forced to make similar choices; what’s more, they’re also forced to choose from among the handful of crops and varieties favored by global markets.  The result is that large farms tend to be adapted to technology and the market, while small farms are adapted to nature. The former may produce the most money, but the latter produce the most food.

By choice, necessity, or both, small farmers around the world make the best possible use of the land available to them.  When they don’t rely on off-farm inputs, their “footprint” is often just the land itself.  The footprint of industrial monocultures, by contrast, includes not only the land under cultivation, but the land from which their mineral inputs are mined, the factories where the herbicides and pesticides are manufactured, the labs where their biotech seeds are developed, and the vast global infrastructure of fossil fuels and highways needed to run their massive equipment and to transport the end product to global markets.  On a finite planet, reducing all of these resource demands is critical.

Needless to say, labor-intensive small farms require a lot more farmers and farmworkers – a good thing in a world in which unemployment is a major problem.  They also use far less fossil-fuel energy – also a good thing.  Nonetheless, government policies continue to promote the further industrialization of agriculture – in part by subsidizing the cost of energy, which makes it cheaper to use machines than people. In the global South, government ‘development’ policies essentially pull millions of people – including some of the most productive farmers – off the land and dump them in urban slums. The result is both increased unemployment and farms that are less efficient in their use of land. In Wendell Berry’s apt phrase, those government policies “take a solution and divide it neatly into two problems”.[6]

So what’s the best way to feed 7 billion people?  With food from small, locally-adapted farms using ecological inputs, that’s how.

Learn more about this issue by listening to ISEC’s Local Bites podcast:

Local Bites Episode 2 – How to Feed the World? A Political Agroecological Approach

In this episode Local Bites host Brian Emerson interviews Dr. M. Jahi Chappell of the Institute for Agriculture and Trade Policy on the question, “What kind of food and farming system do we need to feed a growing world population in an ecologically sustainable and socially just manner?”

Steven Gorelick is Managing Programs Director at the Local Futures (International Society for Ecology and Culture). He is the author of Small is Beautiful, Big is Subsidized, co-author of Bringing the Food Economy Home, and co-director of The Economics of Happiness. His writings have been published in The Ecologist and Resurgence magazines. He frequently teaches and speaks on local economics around the US.

[3] See “The multiple functions and benefits of small farm agriculture in the context of global trade negotiations,” Institute for Food and Development Policy, Food First Policy Brief No. 4, 1999, 1. Download here: http://www.foodfirst.org/pubs/policybs/pb4.html. For more on this general topic, see: “‘Agroecology outperforms large-scale industrial farming for global food security,’ says UN expert” http://www.ohchr.org/en/NewsEvents/Pages/DisplayNews.aspx?NewsID=10178 and “Productivity and Efficiency of Small and Large Farms in Moldova” http://econpapers.repec.org/paper/agsaaea06/21085.htm and “Industrial Agriculture and Small-scale Farming” http://www.globalagriculture.org/report-topics/industrial-agriculture-and-small-scale-farming/industrial-agriculture-and-small-scale-farming.html and UNCTAD’s 2013 Trade and Environment report, “Wake up before it is too late: make agriculture truly sustainable now for food security in a changing climate” http://unctad.org/en/pages/PublicationWebflyer.aspx?publicationid=666 and “Organic agriculture and the global food supply” http://journals.cambridge.org/action/displayAbstract?fromPage=online&aid=1091304 and “Resource-conserving agriculture increases yields in developing countries” http://pubs.acs.org/doi/abs/10.1021/es051670d

[5] As one blueberry grower put it, “When you go out in the field and you watch a machine pick, if you’re not used to it the first time, it looks like you’re dropping a lot on the ground. But if you weigh the cost of picking by hand against what you’re losing, it’s way better to pick by machine.”  Anne-Marie Vazzano, “Mechanical Blueberry Harvesting Can Save On Labor”, http://www.growingproduce.com/article/11058/mechanical-blueberry-harvesting-can-save-on-labor

The Case for Local Food
Planet Local: Bhaskar Save, the Gandhi of Natural Farming